England’s 4-0 victory over Sweden in the Euro 2022 semi-final was watched by an average TV audience of 7.9 million, according to overnight figures.

The match, which was shown by BBC One on Tuesday evening, attracted the highest ratings of the tournament so far.

England face either France or Germany in the final which kicks off at 5pm on Sunday.

The final will be shown live on BBC One and could see the biggest UK TV audience for a women’s football match.

The official figure to beat is 9.0 million, which was set by England’s semi-final defeat by the United States in the 2019 World Cup, according to the ratings organisation Barb.

Sunday’s match will be England’s first European Championship final since 2009.

The Lionesses, who have never won the competition, triumphed over Sweden on Tuesday night following goals from Beth Mead, Lucy Bronze, Alessia Russo and Fran Kirby. 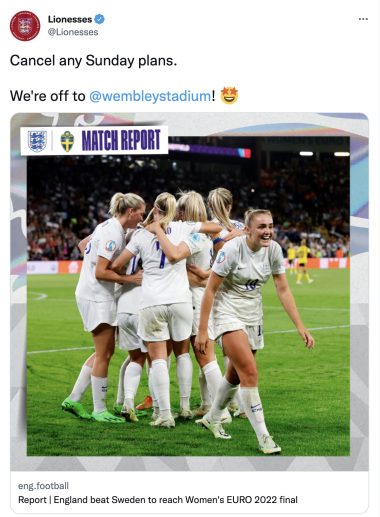 COMPETITION: Have you got what it takes to be the KFC Master?