All fairytales end with “happily ever after” but what happens after ever after?

That’s the question that remains at the heart of David Walliams’ now-annual Sky specials – with the latest story to receive his twisted festive treatment being Hansel And Gretel.

Following the success of Jack & The Beanstalk last Christmas, and Cinderella before that, the classic Brothers Grimm tale – starring the likes of Walliams, Sheridan Smith, Sophie Thompson, and Mark Addy – picks up after Hansel and Gretel have escaped from the witch’s house in the woods.

Emerging from their narrow escape, Hansel and Gretel are dismayed to learn that their village is being enticed by a mysterious stranger with sweet treats. Determined to make things right, the pair have to face their fears and return to the witch’s house for a final showdown. Is the witch alive after all? 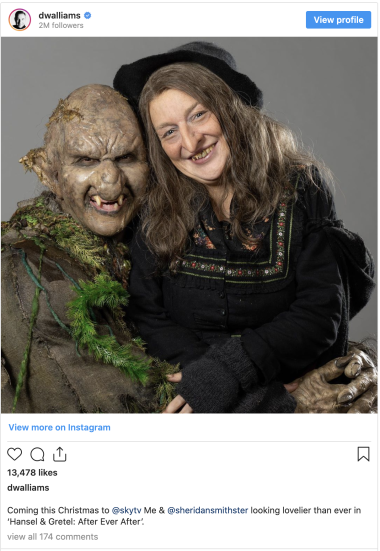 Walliams, 50, couldn’t possibly divulge – but what he will say is it’s a tale of facing your worst fears and putting family first.

WHY HANSEL AND GRETEL – AND WERE THERE ANY CHALLENGES THAT CAME WITH ADAPTING THIS PARTICULAR TALE?

I loved this story as a kid – it was my favourite. Writing a sequel, your main concern as a writer is what does the average person remember of the original story? They tend to know the names of Hansel and Gretel but not know much about them as characters. They think about the Witch and the House of Sweets in the forest, which is an amazing idea, and then Hansel and Gretel shoving the Witch into the oven. I think with this fairytale what you feel the most is the real sense of danger. As a kid, when you’re told about the House of Sweets, it’s like the best thing you’ve ever heard. It sounds almost like a medieval version of a theme park. It’s really terrifying when you realise the children are going to be eaten. So for the sequel we wanted to keep in touch with the surrealism of the House of Sweets. We had to show that and it’s looking brilliant. You also want to make sure there is a genuine threat. It’s not really a jokey threat in this one.

If you’re going to do a sequel, it’s got to tell a different type of story. It can’t just be like, ‘Oh, the witch is bad again and she’s chucked in the oven again’. It’s interesting with fairy stories because they obviously mean different things at different periods of time. They’re constantly being updated, or new people are adapting them, but there is something central about them that we all return to, that we love. Obviously, the idea of witches is an interesting one, because we assumed all witches are bad, but then, if you look back in history, it just seems like a really brutal way in which certain people would treat outsiders. And so we wanted to bring in that element to it, to make it feel modern, and really give a reason for it to exist. I think if it was just a retread of the first story, there would be no point to it.

CASTING SHERIDAN SMITH AS THE WICKED WITCH MUST HAVE BEEN A DREAM COME TRUE?

Yeah, I really like to give her roles where she gets to transform. She’s almost become like a folk hero with the TV drama roles she plays, so it’s really fun to see her dressed up, looking really scary and revolting. We feel very lucky to have her; she’s just a joy. You want to surround yourself with people you can have a laugh with and play and be silly with. When you’re trying to make comedy there is a lot of trial and error. I know more than most people that there is a fair bit of error. So you want an environment where you can come up with things, then dismiss them and not worry too much if they don’t work. You don’t want to feel judged. Sheridan is very playful. She’s just one of those people that every day when you see her you smile.

YOU PLAY A TROLL IMPORTED FROM THREE BILLY GOATS GRUFF – HOW DID THE TWO FAIRYTALES INTERTWINE?

The troll is such a good character, but I think it would be quite hard to do the Billy Goat story – it’s too slight, and also it’s goats, and goats aren’t very Christmassy! But it’s a great story; I love that story. As a kid, I was really interested in the troll… I had a book, and I would just constantly look at the picture of him under the bridge. So I kept on thinking, with this, how can we maybe bring in that character? And I thought, well, we’re in fairytale land and this is a sequel, and it worked well with this idea of another person whose story mirrors the witch’s in some way. Someone who is sort of an outsider, and who then, because Gretel is pure in heart, she brings out the best of him. Also, what’s good about it now is there is this term that we all know, ‘trolling’. So there was plenty to play off with that.

It’s about three hours in make-up and prosthetics and then they put me in this big suit. I love a massive transformation, so I’ve really enjoyed being the troll. That’s one of the most exciting things you can do as an actor. To my mind, the more unrecognisable you are, the more fun it is. People love dressing up at Halloween, and as an actor you get to do that a lot of the time. I love when you are someone else. It’s the best thing ever.

YOU’RE A MAN OF MANY TALENTS. HOW DOES SCREENWRITING AND PENNING YOUR BOOKS COMPARE?

It’s largely similar, although to write an action scene in a book is really hard because it’s hard to make the prose exciting – like a chase or something – whereas in the script, you just go, ‘They chase through the woods’, and then the director gets all the shots. I also like to act out all the characters when I write – mainly in the scripts, so that’s quite a fun process. As an actor too, I try and think, ‘Oh, is that bit of dialogue going to work?’ by reading it out. The great thing is that, if anyone has a better idea, whoever they are, be it the actors, the director, the producer, the lighting person, anybody, you can put it in. And then I get all the credit…

– Hansel And Gretel: After Ever After airs on Sky Max this Christmas.