FROM dodging the beer bottles in the pubs of Sydney, Australia in the early 80s to playing in front of 74,000 at Wembley stadium in 1991, INXS are a ‘real’ band who made it to the pinnacle of pop stardom.

Ten years later and INXS were the biggest band in the world, and they pretty much stayed at the top until tragedy struck in late 1997, writes James Iles.

Originally called The Farriss Brothers, the band changed their name to INXS in 1979, eventually being signed to WEA after years of persistently touring and recording their own material.

They recorded their eponymous debut album, featuring the early promise of ‘Just Keep Walking’ in dusk to dawn sessions after playing, sometimes, two gigs a night.

Despite his reputation for being shy, on stage Hutchence developed a persona with all the swagger of Jim Morrison – he even had the same curly locks and leather trousers – that became the focus of the band.

Albums Underneath the Colours (1981), Shabooh Shoobah (1982), The Swing (1984) followed with a growing level of success and bigger and bigger tours.

After catching the eye of producer Nile Rodgers while on tour in Canada, INXS recorded ‘Original Sin’ with him for ‘The Swing’ album, the single version hit No.1 in Australia in 1983 and became an international hit.

However the ‘Bible belt’ of America took issue with the interracial meaning of the song and record execs wrongly got twitchy so the pressure was really on to come back with a hit.

The band did just that, and in fact they started to really hit the big time when Chris Thomas produced 1985 album ‘Listen Like Thieves’ featuring the US No. 5 hit single ‘What You Need’. It was the first single to feature that famous INXS sound – a radio-friendly formula that was more rock-funk than new wave. 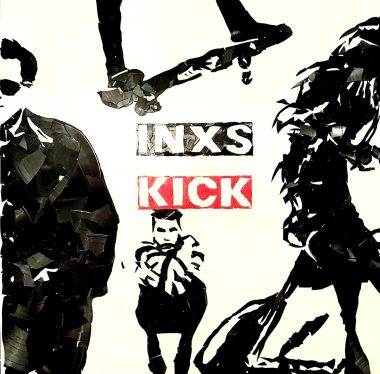 In 1987, the group set about building on their success with the recording of ‘Kick’ – a deliberate effort to produce an ‘album of singles’ that would lift them to global superstardom. It worked.

‘Kick’ was the first album written solely by Andrew Farriss and Hutchence and was nearly ready when Thomas asked the pair for a few more songs to really give the album some sheen.

They went to Hong Kong to write, delivering more tunes, but it was in the cab on the way to the airport that Farriss suddenly had an idea for a guitar riff.

Much to the frustration of the waiting taxi driver, he returned to the apartment and put down the riff on to tape for what would become ‘Need You Tonight’ once Hutchence added the words moments later. Their biggest hit was literally written in minutes!

But the ‘Kick’ album was in jeopardy when it was presented to record company bosses at Atlantic as they hated it on first listen and offered them $1million to re-record it all.

Sticking to the courage of his convictions, INXS manager Chris Murphy hatched a make-or-break plan to put the band on a US college tour backed up with radio play organised via a clandestine arrangement with the label’s promotion team. It paid off and Atlantic scheduled the release for the autumn of 1987.

A major part of the fame that followed was the age of MTV as INXS’ videos for the singles from ‘Kick’ received plenty of screen time.

‘Need You Tonight’, directed by Richard Lowenstein, features a famous mix of live action and animation created by cutting up and photocopying individual frames before overlaying them on top of the film. It won five MTV video awards and ranks at No.21 in MTV’s top 100 greatest videos of all time.

Hutchence was by now in a relationship with Kylie Minogue and while the romance converted her from a pop pin-up into an international sex symbol, it boosted his popularity, opening up the band to an even wider audience.

The ‘Summer XS Tour’ that followed the ‘X’ album saw them play to 74,000 fans at Wembley stadium on 13 July 1991. Seventeen camera angles captured the spectacle and the London recording became the ‘Live Baby Live’ album and video, their first live LP.

‘Welcome to Wherever You Are’, their eighth studio album, soon followed in 1992, taking on a change in sound, in part due to the arrival of grunge and alternative music going mainstream.

The LP went straight to No.1 and featured a 60-piece orchestra sounding triumphant on ‘Baby Don’t Cry’ which followed on from lead-off single ‘Heaven Sent’ in 1992. ‘Taste It’ and ‘Beautiful Girl’ (1993) were also hits on the 2million-selling album.

Citing the need for a break, INXS did not tour ‘Welcome to Wherever You Are’. However, during the European promotion of the album a fateful incident happened that would alter Hutchence’s behaviour forever and, some say, contributed to his premature death in 1997.

While on a night out in Copenhagen with supermodel girlfriend Helena Christensen, Hutchence got into a fight with a taxi driver.

He suffered a fractured skull due to a fall, causing a loss of sense of smell and taste. The alleged injury also caused him to act erratically, abusively and to suffer insomnia.

INXS recorded ‘Full Moon, Dirty Hearts’ in 1993 but during the recording on the Isle of Capri, Hutchence, still struggling from his head injury, became increasingly aggressive towards band members and smashed up the studio, once threatening bass player Garry Beers with a knife.

The album did not live up to the standards of the previous three and in 1994 a Greatest Hits was released.

The group did reconvene for the 1997 LP ‘Elegantly Wasted’ with a decent single of the same name. The choruses are overdubbed with Hutchence singing “We’re better than Oasis” in response to Noel Gallagher rather pathetically calling him a “has-been” at the 1996 Brit Awards.

But personal problems were mounting for Hutchence who was by now in a relationship with Paula Yates.

When Yates, their daughter Heavenly Hiraani Tiger Lily and her daughters with ex-husband Bob Geldof were halted from seeing Hutchence (by a court order) during rehearsals for the ‘Elegantly Wasted’ he was furious and upset and had already been drinking and taking drugs.

Hutchence shocked the whole world when he took his own life in the Ritz Carlton hotel in Sydney on November 22, 1997, aged just 37.

The ‘Mystify’ documentary of 2019 questioned whether the alleged brain injury suffered after being attacked in 1992 contributed to his depressive state, that was already impacted by the personal turmoil of his turbulent relationship with Yates and drug use.

Revered in life by heavyweight rock contemporaries like Bono and Nick Cave, Cave sang ‘Into My Arms’ at Hutchence’s funeral.

Another legend was gone too soon but his legacy with INXS lives on.

Aussie journalist Andrew Mueller, writing for The Guardian in 2014, said of Hutchence: “He gave Australians something to dream at, which is what people in his line of work are supposed to do.”

Samaritans: Whatever you’re going through, you can call Samaritans free any time on 116 123 (this number will not appear on your phone bill), email jo@samaritans.org, or find your nearest branch at www.samaritans.org/branches.

Underrated track = To Look At You

Check out James’ ‘I is for INXS’ playlist on Spotify at shorturl.at/corUX