Sophie Ellis-Bextor has lent her support to a new campaign aiming to combat loneliness over Christmas. 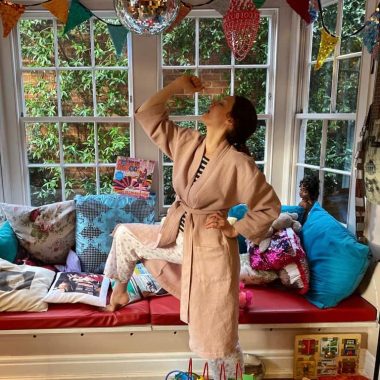 The Murder On The Dancefloor singer is backing efforts by a coalition of organisations to connect communities via a Great Winter Get Together.

The initiative of The Jo Cox Foundation, which is now in its fourth year, will run from December 14 to January 18.

As part of this month of activities, the Together Coalition is launching #ChristmasTogether, which calls on the public to reach out to someone and to sign up to bring Christmas cheer to someone as an NHS Volunteer Responder.

It comes as new research from The Royal Voluntary Service (RVS) suggested more than one in five people are concerned that they will not see anyone over Christmas.

Earlier this year, Ellis-Bextor entertained fans during the Covid-19 lockdown by hosting “Kitchen Discos” which were streamed online.

She kicked off the #ChristmasTogether campaign through a video call with Owen McGhee in Scarborough.

Mr McGhee, 51, said: “I live alone, but until this pandemic, I never knew the real difference between being alone and being lonely.

“My mental health took a toll when I found out we weren’t able to go out and meet people and I was struggling to find the motivation to look after myself.”

The start of lockdown came at a difficult time when Mr McGhee was suffering with both his physical and mental health.

He referred himself for the NHS Volunteer Responder programme after hearing about its launch, which he said had been “the light at the end of a dark tunnel”.

“The little chats lift my spirits and it’s so nice to just have a conversation with someone new,” he added.

“All of the volunteers are interesting and kind and the service has been vital for my mental wellbeing.”

The RVS said the next few weeks will be tough going for the most vulnerable people, amid continuing Covid-related restrictions.

A survey of 2,400 adults found that 22% fear they will not see anyone over the festive break, while around one in six said they were “dreading” Christmas.

Just over half of respondents said their plans for Christmas would be disrupted.

Since the second lockdown began, the RVS said it had reported a 36% increase in demand for support via its Volunteer Responders scheme.

Catherine Johnstone, chief executive of the RVS, said: “We are very proud of the support our wonderful volunteers have provided to those in need throughout the pandemic so far.

“However, we are already seeing a rise in requests for help as we approach the festive period and vulnerable people are inevitably feeling isolated.

“This Christmas is likely to be tough going for the most vulnerable in our communities and many will be spending it on their own. The help of volunteers is needed more than ever before.”

Kim Leadbeater, ambassador for The Jo Cox Foundation, said: “After such a difficult year the Great Winter Get Together is more important than ever.

“It has been inspirational to see how communities have pulled together during such challenging times and this campaign provides the perfect platform for this to continue.”

The Archbishop of Canterbury, Justin Welby, said: “This Christmas might feel very different than normal for many of us. What has not changed is what we are celebrating: The birth of Jesus Christ, who came to be with us, and who promised never to leave us.

“And so this Christmas, let’s take hold of this, and reach out to any who might be lonely or isolated.

“That is one of the messages of Christmas, and it is wonderful that the Together Coalition is promoting it, and encouraging all of us to join in.”

Find out more about the Great Winter Get Together by clicking here.

10 tips for how to effectively homeschool

Clap for Carers set to return as ‘Clap for Heroes’

How do Brits feel about the new national lockdown?