World Antimicrobial Awareness Week: 7 things you need to know about the antibiotics crisis

Antibiotic resistance has taken a back seat recently because of the more obvious threat of Covid. But superbugs becoming resistant to drugs isn’t something the world can afford to forget, as studies have predicted that in around 30 years antibiotic resistance will kill more people worldwide than cancer. 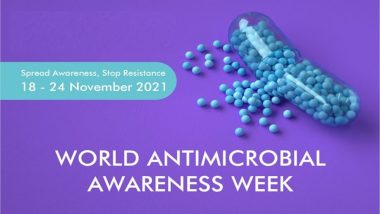 So, to remind us of the looming threat, this year’s World Antimicrobial Awareness Week (WAAW), running November 18-24, has a theme of ‘Spread Awareness, Stop Resistance’.

Indeed, the WHO estimates that by 2050, deaths attributable to AMR globally could be as high as 10 million a year.

“Bacteria are our ancient enemies, but we no longer have the upper hand,” warns cell biologist Professor Jennifer Rohn, head of the Centre for Urological Biology at University College London (UCL) and a member of the new five-year programme, Beyond Antibiotics, to develop new technology to improve the diagnosis and treatment of bacterial infections.

“Antimicrobial resistance has been a pressing and global problem for many decades,” she says. “Already about 700,000 people a year die from antibiotic-resistant infections, and this is set to accelerate in a way that might send us back into the medical dark age if not addressed.”

She says Covid has overshadowed AMR, but stresses:

“AMR has very much not gone away, and in the long-term the consequences of AMR will be far more destructive. The entire world has a part to play in pulling us back from the AMR abyss, from nations all the way down to citizens.”

A 2019 UN and international agencies report on AMR stressed it was “one of the greatest threats we face as a global community.”

2. Antibiotic misuse and overuse is the main cause

The WHO says the misuse and overuse of antimicrobials in humans, animals and plants is the main reason for increasing numbers of drug-resistant infections. “Poor diagnostic and prescribing practices and patients not following their treatment also contribute,” it says.

High rates of resistance against antibiotics often used for common bacterial infections including urinary tract infections, sepsis, sexually transmitted infections, and some forms of diarrhoea, have been observed, say the WHO, which warns this indicates that we are running out of effective antibiotics.

Another part of the problem is that new antimicrobials aren’t being developed. The WHO says “the clinical pipeline of new antimicrobials is dry,” pointing out that the few developed in recent years have brought little benefit over existing treatments, and very few target the most critical resistant bacteria.

The charitable health foundation Wellcome (wellcome.org) says no new classes of antibiotics have been discovered since the 1980s, as discovering and developing genuinely new antibiotics is time-consuming and expensive. It says it can take 10-15 years and over $1billion (£750million) to develop a new antibiotic – and it frequently fails. Pharmaceutical companies often can’t recover their costs or make a profit – after all, antibiotics need to be used as sparingly as possible.

Dr Diane Ashiru-Oredope, lead pharmacist in the antimicrobial resistance division at the UK Health Security Agency (UKHSA) points out that many of the Covid-prevention measures we’ve all become used to, including physical distancing and enhanced infection prevention and control, reduced the number of resistant infections.

“These will rise if we don’t continue to take effective action,” she warns. “Thorough and regular hand washing, catching coughs and sneezes, and good cleaning at home, in the office and in healthcare settings remain the most effective ways of reducing the risk of infections in the first place, before they can become resistant.”

6. Don’t ask for antibiotics when you’ve got a virus

“As we head into winter, it’s important to remember antibiotics aren’t needed for many cold-like symptoms,” says Ashiru-Oredope. “Taking antibiotics when you don’t need them won’t help you and puts you and your loved ones at increased risk from drug resistant infections. Please listen to your GP, nurse, dentist or pharmacist’s advice.”

Take the full course of antibiotics as prescribed, advises Rohn, and don’t share them with others even if they have the same symptoms as you.

Want to get your home as clean as a hospital? Here are some simple tips from NHS cleaners

Winter floods could be coming – how to prepare your home