A LOCAL hero who threw himself on a grenade to save his fellow soldiers during the Second World War has finally been honoured – 80 years later.

Company Sergeant Major Augustus Jennings of the Royal Warwickshire Regiment made the ultimate sacrifice at the notorious Wormhoudt Massacre of British soldiers by the SS during the retreat to Dunkirk in 1940, an incident that went unreported for many years.

After campaigning for over 30 years, CSM Jennings’ daughter Diane Jennings-Norton has been presented with a full set of the campaign medals her father should have received at a special ceremony at The Royal Regiment of Fusiliers Museum in Warwick.

The story of Rugby man CSM Jennings came to the attention of Unlocking Warwick, a group of Warwick Town Council volunteers who were researching the stories behind the names on the town’s War Memorial. 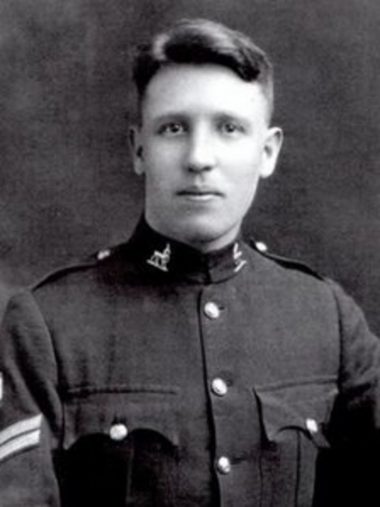 With some other men from the Gloucesters and the Worcesters and some French soldiers, the Warwicks had been grimly holding up the German advance, under orders to ‘resist to the last bullet’, allowing more than 300,000 British troops to escape from the beaches of Dunkirk.

When they ran out of ammunition they surrendered and became prisoners of war – but their captors were the elite Hitler bodyguard unit of the Waffen SS.

They herded the men into a small barn, began shooting them and threw in grenades. Out of nearly a hundred men, only five survived to tell the tale – that CSM Jennings threw himself on to the first grenade and was killed instantly. 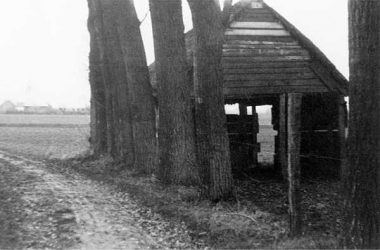 The scene of the massacre at Wormhoudt in France. A museum now stands at the site.

Unlocking Warwick established that three local men were among those murdered that day – Tom White from Market Street, Thomas George from Lakin Road, and Arthur Williams who worked at Warwick Aviation before enlisting.

But Augustus Jennings’ name is not on the Warwick War Memorial, so the researchers did not know about his involvement.

His great-granddaughter saw the subsequent article in a local paper about ‘The Forgotten Massacre’ and put the researchers in touch with her grandmother, Diane Jennings-Norton, now in her eighties and living in Plymouth.

Diane was born in Warwick when her father, a career soldier, was living at Budbrooke Barracks. When he left for France in 1939 the family moved back to Rugby where Augustus had been born, and where his name remains on the town’s War Memorial.

Diane has been campaigning to receive her father’s medals since she discovered the truth about his death when journalists uncovered the story in 1988.

The Ministry of Defence said too much time had elapsed for the issuing of Second World War medals – but Diane’s campaign was finally resolved by the Royal Warwickshire Regiment Association and the Fusiliers Museum at a special presentation.

She was presented with the medals and a framed citation describing CSM Jennings’ outstanding act of bravery by the Chair of the Museum Trustees, Lt Col John Rice.

Diane said: “It is absolutely wonderful to have some recognition for my father’s brave sacrifice during the war, and for the family to finally have his campaign medals after all this time.

“We are deeply grateful and moved by this generous gesture from my father’s regiment. I really wanted my grandchildren to have the medals my father never received, and to know about his bravery. The medals and the certificate about Augustus’ life are beautifully presented and will be treasured for many years to come.

“I feel like I’ve completed his story now. He was killed 80 years ago, but no one admitted the massacre and we had no idea how he had died on the road to Dunkirk until I saw my father’s picture on a TV investigation programme and the details finally emerged.” 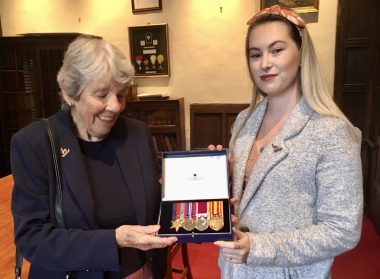 A proud Diane Norton shares the family heirlooms with her granddaughter Grace Jenkins.

Unlocking Warwick’s secretary Rick Thompson said: “The Royal Regiment of Fusiliers Museum and the Royal Warwickshire Regimental Association responded immediately to Diane’s appeal. They found replicas of the medals the family had never received, and a ‘court mounted’ set with a framed certificate describing Sgt. Major Jennings’ outstanding bravery were presented to his daughter.

“The quotation from John’s Gospel on the citation has seldom been more appropriate – ‘Greater love hath no man than this that a man lay down his life for his friends’.”

Lt Col Rice said: “The museum was delighted to source the medals that were due to Augustus Jennings’ family, and we are grateful to the Warwickshire Regimental Association for funding their acquisition.

“The four medals are the 1939-45 Star, the 1939-45 War Medal, the Long Service and Good Conduct Medal, and the original Dunkirk Medal that had been given to Diane when she visited the site of the massacre in France some years ago. All have been mounted in a blue leather case embossed with the name of WO2 (Warrant Officer Class Two) Jennings, and the regimental crest – the antelope.”

The Royal Regiment of Fusiliers Museum is self-funded and relies on donations. Visit www.warwickfusiliers.co.uk/pages/pg-35-online_donations to donate.

The Royal Warwickshire Regiment’s crest – the antelope, known to Warwicks as ‘Bobby’ – features on the masthead of The Observer due to a family connection.

Alfred Bullivant, the father of The Observer’s founder Chris Bullivant, was called up at the beginning of the war and joined the Regiment as a Private, before progressing to Regimental Sergeant Major. Like CSM Augustus Jennings, he was stationed at Budbrooke Barracks.

Alfred was himself following in the footsteps of his uncle, Christopher Bullivant, who also served in the Warwicks and gave his life during the First World War.

The Observer is proud to display Bobby the antelope on its front covers, with the kind permission of the Royal Warwickshire Regiment.