The trail is aiming to hatch a bit of fun while encouraging families to support and explore their high street.

Encompassing 56 shops the trail will run from Friday April 15 to Friday April 22 and will also introduce treasure hunters to some new businesses along the way! 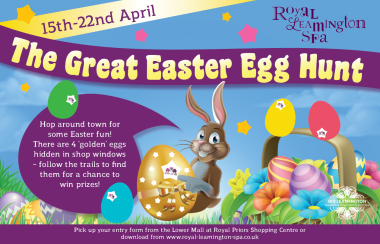 BID Leamington has organised the trail where colourful eggs will be displayed in shop windows with a choice of four trails, pink, yellow, green and blue or you can do them all.

There are four ‘golden eggs’ to be found, one on each route and once found treasure hunters just have to jot down the name of the shop(s) onto the entry form to be entered into a prize draw to be in with a chance of winning prizes from £5 book token up to £50 gift voucher to be spent in Leamington Spa Town Centre shops.

The Great Easter Egg Hunt coincides with the Easter holiday break, and Alison Shaw, project manager at BID Leamington, hopes it will encourage people to hop around the town.

“We wanted to spread a bit of Easter fun around Leamington and give families a reason to come into town.

“It’s a great way for people to explore the town visiting a wide range of fantastic retailers and have a bit of fun.

“We hope plenty of people give The Great Easter Egg Hunt a go, and we’re looking forward to seeing families explore Leamington Spa this spring.”

Entry forms for the Great Easter Egg Hunt can be downloaded here, can be picked up from the white unit on the Lower Mall of Royal Priors, or can be found in all participating shops.

A post box for posting entries will be located at Lower Mall of Royal Priors Shopping Centre, or entries can be posted directly to BID Leamington.

FREE Event: The Sky in a Room with Icelandic artist Ragnar Kjartansson is a ‘never-ending lullaby’