IRISH rockers U2 are truly one of the greatest bands ever, and a massive global brand, so it’s easy to forget it’s their talent as musicians and songwriters that has put them at the pinnacle of popular music.

Such is their commercial power, the Dublin four-piece placed third in The Sunday Times Musicians Rich List of 2019, with an estimated wealth of £583million, beaten only by Andrew Lloyd-Webber and Paul McCartney.

No surprise as they have released 14 studio albums and have sold an estimated 170million records worldwide, scooping 22 Grammy Awards (that’s more than any other band) and, in 2005, were inducted into the Rock and Roll Hall of Fame at the first time of asking.

They initially found huge success in the 1980s, particularly with ‘The Joshua Tree’ and ‘Rattle and Hum’ LPs, but James Iles explains why he thinks 1991’s ‘Achtung Baby’ is their best album.

They were originally called Feedback, before changing to The Hype in 1977, and finally settling on U2 – the name of an American cold war spy-plane.

Four years after they started out, they had a recording deal with Island Records from where they went on to conquer the world throughout the 1980s with their post-punk songs and sociopolitical themes, earning critical acclaim along the way.

U2’s third album ‘War’ got to No.1 in the UK album charts, knocking Michael Jackson’s ‘Thriller’ off top spot, also getting to No.12 and going gold in the US.

My first real experience of properly listening to U2 comes in here too – spinning their ‘Under A Blood Red Sky’ (1984) LP (No.2 in the UK) on the decks at my mate’s house when we were teenagers. 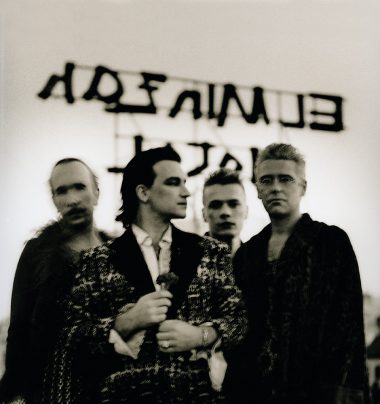 “We’re One but we’re not the same” – U2 as pictured by Anton Corbijn for the ‘Achtung Baby’ album photos.

I was never really a rock music fan beforehand, but there was something about the musicianship and skill on this live recording of the show at the Red Rocks Amphitheatre on June 5, 1983 that inspired me to follow.

The atmosphere of U2 playing songs like ‘October’, ‘New Year’s Day’, ‘I Will Follow’ and Bono introducing ‘Sunday Bloody Sunday’ with the memorable words: “This is song is not a rebel song” sent shivers down my spine as if I were at the concert in person.

I believe it is their best LP as, given the deliberate change in direction they pursued and, despite the tortuous journey they went on to achieve it, it was still a huge success.

It also revolutionised U2’s sound and image, freeing them from the shackles of their traditional rock sound.

‘Rattle and Hum’ was a hybrid of live and new songs that truly put U2 on the global map, scoring No.1 chart positions in the UK, US, Australia, Germany, France and Spain; and the third single taken from the LP ‘Desire’ was their first UK No.1 too.

But its massive commercial success (it shifted 14million copies worldwide) came with criticism towards the album and the film that accompanied it, drawing comments such as ‘pretentious’ and ‘bombastic’.

Drummer Larry Mullen Jnr. admitted they were “the biggest band, but not the best” while Bono told fans at a live show in 1989 it was the “end of something for U2” and they needed to dream it all up again.

The band took a hiatus and wrestled with themselves to climb that creative peak, and ultimately reinvent themselves.

‘Achtung Baby’ then, was to take a darker, more introspective direction while the group abandoned their rock cliched image for a more light-hearted and self-deprecating one.

The sound of it had probably been born in early 1990 when Bono and the Edge worked on the score for a theatre production of ‘A Clockwork Orange’ with music inspired by industrial bands that was more avant-garde than U2’s traditional sound.

‘Alex Descends into Hell for a Bottle of Milk/Korova 1’ – the B-side to ‘The Fly’ was included in that score.

Hiring Daniel Lanois and Brian Eno as producers, U2 decamped to Hansa Studios in Berlin where Bowie and Eno had created classic albums in the late 70s/early 80s.

U2 went looking for energy and inspiration following the collapse of the Berlin Wall and German reunification, but instead found a country in a state of dilapidation and a recording studio in need of a makeover, with outdated equipment.

Their time in Berlin was fraught with conflict amid tensions over a shift in musical direction and concerns over the quality of their songs.

For example, Adam Clayton and Larry Mullen Jnr felt pushed out by Bono and the Edge writing songs more closely together and threatened by the use of drum machines as the Edge pursued his new passion for dance music and an industrial sound.

But one song came out of the Berlin sessions that Clayton later reflected on as a “baptism of fire” for the group that salvaged their spirits and brought them back together. 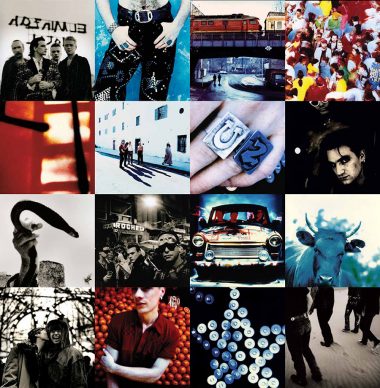 Revolutionary record – The album sleeve to U2’s 1991 seminal LP ‘Achtung Baby’ – which was designed by Steve Avrill and Shaughn McGrath – abandoned the regular ‘heroic’ landscape cover shots of the band for a patchwork of snapshot images, and more colour.

That song was ‘One’, which went on to be one of U2’s most memorable songs.

‘One’ was borne out of a chord progression that was first linked to an early version of ‘Mysterious Ways’ which all four improvised on, restoring their faith in their collective output.

Bono cemented the moment in his lyric which is undoubtedly a metaphor for the band: “We’re one, but we’re not the same. We get to carry each other.”

After the disappointments of Berlin, U2 returned to Dublin where it was make or break time.

Fortunately they all decided they did want to carry on with the group and they set about more sessions at Elsinore, a manor in a suburb of their home city.

The tracks ‘The Fly’, ‘Ultraviolet (Light My Way)’ and ‘Zoo Station’, emerged from the recordings. While recording ‘The Fly’, Bono would sport a pair of over-sized sunglasses, a persona he also took on the subsequent tour.

‘Achtung Baby’ got its title from the German word for attention or “watch out” while baby meant the new birth of something, and that’s exactly what was happening on these recordings.

The phrase “achtung baby” was also coined by a sound engineer during the recording.

After some final work and mixing involving previous U2 producer Steve Lillywhite, U2 were finally happy with their revolutionary record.

‘Zoostation’ pitches the tone for the album, opening with distorted guitar slides and drums to make listeners think it’s a broken CD but by Bono’s “ooh aahs” you know it’s U2.

Lyrically, ‘Zoostation’ puts the listener aboard a train to an unknown destination.

It sets the scene for a musical journey alighting somewhere rather exciting and excitingly different.

Bono’s distorted vocal declares they are “Ready to let go of the steering wheel” while being “ready for what’s next, ready to duck..and dive.”

But let’s face it, the sign of a perfect album is every song could be released as a single and, with songs of the calibre of ‘So Cruel’ and ‘Until The End of the World’, ‘Achtung Baby’ has lifetime membership of that exclusive club.

The LP debuted at No. 1 on the US Billboard albums chart, was No.2 in the UK (kept off top spot by Michael Jackson’s ‘Dangerous’), went on to sell 18million copies worldwide and win a Grammy, plus it is widely recognised as one of the greatest albums of all time.

The Zoo TV tour that followed set the benchmark for future stadium rock shows, pushing the visual and technical limits of the times with a stage set featuring Trabant cars, dozens of large video screens, confessional booths, prank phone calls and guests including everyone from Salman Rushdie to Lou Reed and from Benny and Bjorn from ABBA to Axl Rose.

It also saw Bono recreate his character ‘The Fly’ as well as those of ‘Mr MacPhisto’ and ‘Mirror Ball Man’ as he increasingly self-parodied the rock god persona.

A bold multi-media spectacle, it mimicked the wild antics of morning “zoo” radio and TV shows, and it was seen by 5.3million people across the world and grossed $151million.

‘Achtung Baby’ shifted the direction of U2 on to a much more creative and diverse course that helped them maintain relevance and continue to garner acclaim for nearly three more decades, to date.

They had felled ‘The Joshua Tree’ and planted a forest of new horizons in its place.