Bookcase: Reviews of Sugar by Bernice McFadden and Velvet Was The Night by Silvia Moreno-Garcia

This week’s bookcase includes reviews of Sugar by Bernice McFadden and Velvet Was The Night by Silvia Moreno-Garcia.

Pick up a Latin American noir, or dive into the world of a beloved children’s character…

In a hot, sleepy town full of magnolia trees and the sound of church choirs, Sugar Lacey has eyes popping and gossip flying as she struts into town wearing spiked heels and wild wigs.

Bernice McFadden tells a touching story of friendship between the bold, charismatic Sugar and her quiet, God-fearing neighbour Pearl, as Sugar riles the small town of Bigelow, Arkansas and Pearl grieves the brutal murder of her young daughter.

Set for British release 21 years after it was published in the United States, Sugar follows expertly crafted characters as they wade through grief, sexism, and the bitter judgement of the 1950s Deep South with warmth and heart.

Though a perfect 10/10 score for a book is rare, Sugar is a page-turning novel guaranteed to be looked back on as a timeless classic.

What Strange Paradise starts with the bodies of refugees washed up on the beach of a Greek island and follows the seemingly miraculous survival of one refugee: nine-year-old Amir. 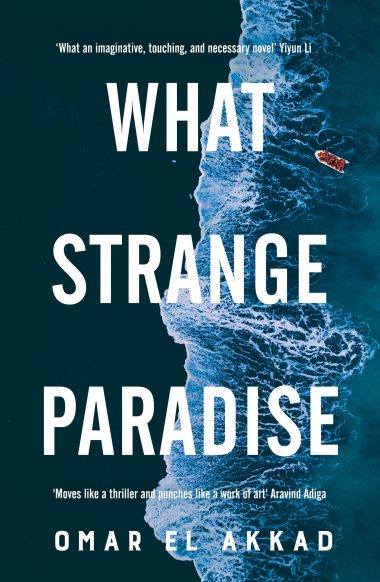 The second novel from Egyptian-Canadian journalist and author Omar El Akkad alternates chapters of ‘Before’ and ‘After’, corresponding with Amir’s time in Syria and Egypt and then on the packed, death-trap boat heading to Europe and his rescue by local teenager Vanna.

What Strange Paradise is an extremely accomplished and moving novel, but also a gripping page-turner as the two children flee the authorities

It reads as a type of shattered fairy tale on several levels: the hopes and dreams of the boat refugees, and the superhuman feats enabling Amir and Vanna to mimic his favourite adventure stories – with an ambiguous ending leaving a devastating question mark over the whole tale.

3. Velvet Was The Night by Silvia Moreno-Garcia is published in hardback by Jo Fletcher Books, priced £16.99 (ebook £8.99). Available now

Silvia Moreno-Garcia continues the Latin American tradition for noirs in Velvet Was The Night.

The story is told from two perspectives: Maite, a lonely secretary whose dull life gets upended when she joins the search for her missing neighbour and gets caught up in the revolutionary cause, and Elvis, a goon for hire who dreams of American music and a better life.

The setting of 1970s Mexico City is fascinating, and Moreno-Garcia skilfully weaves in the historical context and political upheaval without taking away from the plot of her story.

While the characters feel a bit one-note and the action takes too long to reach a crescendo, it’s still a page-turning read full of colour and action.

Similar to Moreno-Garcia’s previous novel Mexican Gothic, the style is hammy – in an extremely entertaining way.

Children’s book of the week

Bluey has won herself a special place in the viewing schedule of many toddlers.

From the funky theme tune to the endearing characters the cartoon is right up there with the best – translating that into a book is never an easy thing, but Bluey: The Beach does it seamlessly.

This book delivers a heart-warming tale of Bluey and her family at the beach and how she copes with the hurdles she has to overcome, from seagulls to crabs and jellyfish.

It examines a mother and daughter relationship, showing how sometimes needing your own space doesn’t mean you don’t care for other people, and how children desperately wish to be like their parents without even knowing it.

In a crowded genre Bluey: The Beach stands out as a delightfully entertaining tale of family life with beautiful illustrations.

It will definitely be added to the bedtime pile of books.

1. How to Kill Your Family, by Bella Mackie

3. The Island of Missing Trees, by Elif Shafak

4. Klara and the Sun, by Kazuo Ishiguro

5. A Narrow Door, by Joanne Harris

6. The Invisible Life of Addie LaRue, by V.E Schwab

8. The Devil’s Advocate, by Steve Cavanagh

9. Sorrow and Bliss, by Meg Mason

1. The Comfort Book, by Matt Haig

2. The Boy, The Mole, The Fox and The Horse, by Mackesy, Charlie

3. Vaxxers: The Inside Story of the Oxford AstraZeneca Vaccine and the Race Against the Virus, by Sarah Gilbert and Catherine Green

4. The Women Don’t Owe You Pretty, by Florence Given

5. The Power of Geography: Ten Maps That Reveals the Future of Our World, by Tim Marshall

7. Tunnel 29: Love, Espionage and Betrayal: The True Story of an Extraordinary Escape Beneath the Berlin Wall, by Helena Merriman

9. The Anglo-Saxons: A History of the Beginnings of England, by Marc Morris

10. Ancestors: A prehistory of Britain in seven burials, by Alice Roberts