Sarah Harding’s heartbroken Girls Aloud bandmates have rallied around the singer after she revealed she had been diagnosed with cancer. 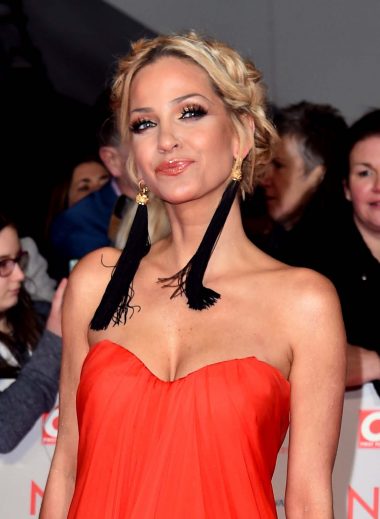 Harding, 38, stunned fans after announcing she had breast cancer which had since spread to other parts of her body.

The defiant star said she is having weekly chemotherapy sessions and told fans: “I am fighting as hard as I possibly can.”

Cheryl shared a broken heart emoji in response to the news while Walsh said: “My heart is broken. You are so strong and brave and we are with you every step of the way.”

Coyle wrote on Instagram: “I love you!!! You have always been able to achieve miracles when needed!! I am here for all the way & always will be!!.”

She ended her message with heart emojis, three crowns and stars.

Roberts tweeted: “It goes without saying that this is blindsiding. @SarahNHarding you’re so loved and supported.”

The singers formed Girls Aloud on ITV’s Popstars: The Rivals in 2002.

Announcing her diagnosis, Harding shared a photo of herself in her hospital gown next to machines on Instagram. She captioned it: “I hope you are all keeping safe and well during these uncertain times. I’ve not posted on here for so long, thank you to everyone who has reached out to check in on me, it really does mean a lot.

“I feel now is the right time to share what’s been going on.

“There’s no easy way to say this and actually it doesn’t even feel real writing this, but here goes.

“Earlier this year I was diagnosed with breast cancer and a couple of weeks ago I received the devastating news that the cancer has advanced to other parts of my body.

“I’m currently undergoing weekly chemotherapy sessions and I am fighting as hard as I possibly can.

“I understand this might be shocking to read on social media and that really isn’t my intention.

“But last week it was mentioned online that I had been seen in hospital, so I feel now is the time to let people know what’s going on and this is the best way I can think of to do so.”

She added: “My amazing mum, family and close friends are helping me through this, and I want to say a thank you to the wonderful NHS doctors and nurses who have been and continue to be heroes.

“I am doing my very best to keep positive and will keep you updated here with how I’m getting on. In the meantime I hope you’ll all understand and respect my request for privacy during this difficult time.

“Sending you all so much love….xx”

Loose Women panellist Carol McGiffin, who was diagnosed with breast cancer in 2014, voiced her support for Harding on the ITV show. The 60-year-old presenter, who underwent a mastectomy, chemotherapy and radiotherapy during her own treatment, said telling others was “the hardest thing”.

She added: “It’s hard enough getting the diagnosis and you are getting used to that, but then when you have to tell other people, it’s difficult.

“I only told my family and really close friends but with every one of them I had to make a real proper effort to think it through and make a time and place to do it.

“For her to have to do that and put it on social media and tell the world straight away, I feel for her. It’s devastating, especially as she has been given the terrible news that it has actually spread as well.”

Coronation Street actress Sally Dynevor, who was diagnosed with breast cancer in 2009, said on Loose Women: “My heart goes out to Sarah Harding. It is really difficult to tell people.

“I remember telling my fellow cast members. It was the hardest thing I have ever done. Also having to tell my children, that was really, really hard.”

The 57-year-old was diagnosed at the same time as her character on the ITV soap, Sally Webster, also discovered she had the disease. She added: “The hardest thing for me was that life was imitating art.

“There was an afternoon where I just thought I would go and check to see if I was OK and I just had a feel and I could feel something really tiny.”

She said it was the “biggest shock for me ever because I never would have checked if it wasn’t for what I was doing on the street.”

Asked whether, a decade after her treatment, she still thought about her cancer, Dynevor said: “I never think about it. It never really enters my head.

“Occasionally I will worry if I have got an ache or a pain, I will start panicking a little bit, but no, it was a chapter of my life.

“I said to my kids it was a blip in my life and I am very lucky I am back to how I was before.

“It doesn’t define me, it’s just something that happened to me and it was a long time ago.

Girls Aloud went on hiatus on 2009 before splitting in 2013. Harding has been largely out of the public eye for the last few years, after winning Celebrity Big Brother in 2017, narrowly beating singer Amelia Lily, with Made In Chelsea’s Sam Thompson coming in third.

During her time in the reality TV house, she began an ill-fated romance with Bachelorette star Chad Johnson.

In 2016 Harding made her stage debut in Ghost – The Musical, a retelling of the hit 1990 film Ghost, which starred Demi Moore and Patrick Swayze.

It followed a turn on the Channel 4 reality show The Jump, on which she suffered a knee injury and was forced to pull out.

NHS advice says you should see a GP if you notice any of the following: