How the Other Half Loves - Kenilworth Talisman Theatre 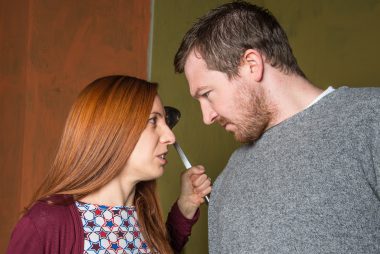 How the Other Half Loves

It’s almost startling to think that Alan Ayckbourn’s comedy about marital chaos arising from a forbidden fling would simply not work in an age of mobile phones and texting.

This instantly classifies it as a period piece, yet the morals and social issues arising from its 1969 setting are every bit as applicable today.

The fact is that Ayckbourn’s wit and ingenuity do not date and have the capacity to carry on entertaining in terms occasionally comparable to the likes of Coward and Rattigan. The challenge of successful performance is as formidable as it ever was and here director Vanessa Comer effectively delivers the goods.

Visual complexity is the keynote as two couples hold dinner parties for the same guests on consecutive nights and, more significantly, on the same set, resulting in the players niftily dodging around each other and undergoing instant switches of conversations.

Director and cast handle it all with brisk efficiency and the pace is strongly maintained, even when dissolving into outright farce. The plot makes merry with the idea of one young husband’s secret affair with his boss’s (older) wife and another’s sexist and bullying tactics with his shrinkingly timid other half.

What lifts the production from the level of competent pot-boiler is a deliciously funny central performance from Bill Davis as the innocent elder statesman of the group, bumbling his way through well-meant advice and counselling to the others while failing entirely to grasp the realities of the discord around him.

There is further smart comedy work from Katie-Anne Campbell as the young wife driven to near-catatonia by her man’s almost pantomime nastiness.

Although there are such hints of the darkness which would shade many of Ayckbourn’s later plays, this one remains fairly bland on the surface. Essentially it’s a crowd pleaser and that’s how it works here.

How the Other Half Loves.docx

Worried about paying for insurance? Here’s what to consider in terms of costs and cover