John Lennon at 80: How the 'Imagine' album was his sugar-coated sermon to the world

ONE of my earliest memories is the tragic news of John Lennon’s assassination in New York on December 8, 1980. I was only four years old but even back then – in a world without satellite rolling coverage or the internet – that dark day was inescapable on the TV, radio and in the newspapers; such was the magnitude of his murder.

The world was robbed of one of the greatest ever songwriters and we still wonder today what music he might have blessed us with if he had been here today, or even if The Beatles might have reunited.

Lennon had released ‘Double Fantasy’ with Yoko Ono the month before his death, but it was his signature song ‘Imagine’ that went to the top of the charts in the aftermath. The album of the same name, originally released in 1971, is also one of his finest, says James Iles. 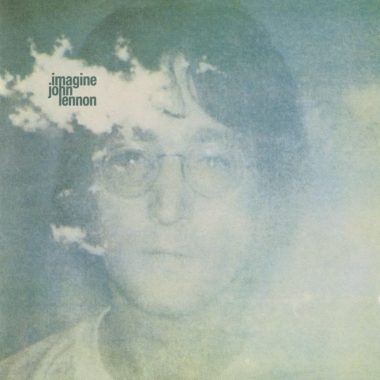 ‘IMAGINE’ was John Lennon’s second solo album since The Beatles went their separate ways and some of the needle with Paul McCartney is evident in the songs recorded over three months at his home in Tittenhurst Park (Ascot Sound Studios), Abbey Road and the Record Plant in New York City in early to mid-1971.

The Beatles had been plagued by business difficulties after Brian Epstein’s death in 1967, eventually all falling behind Allen Klein as manager, much to Paul McCartney’s displeasure. Ringo Starr and George Harrison had already briefly left and returned. Lennon quit in September 1969, but it was not clear how long for.

Then, following a row over the release of Paul McCartney’s solo album clashing with the scheduling for ‘Let It Be’ and Starr’s debut album, coupled with McCartney’s dislike of Phil Spector’s treatment of some of the ‘Let It Be’ tracks – mainly the title track, he officially left the Fab Four on April 10, 1970.

With headlines like “Paul Quits The Beatles” the other three felt betrayed and Lennon certainly used words as weapons on the ‘Imagine’ album.

After the big split, John Lennon and Yoko Ono had entered a period of four months of ‘Primal Therapy’ – a therapy promoted by Arthur Janov where the patient recalls and re-enacts disturbing past experiences and expresses normally repressed anger or frustration through spontaneous and unrestrained screams, hysteria, or violence.

Lennon got Janov and his wife in to conduct the therapy after being impressed by a copy of Janov’s “The Primal Scream” book that had been posted to him at Tittenhurst.

The therapy influenced debut album ‘John Lennon/Plastic Ono Band’ and it can still be heard on ‘Imagine’ which was co-produced by John and Yoko with Phil Spector.

Fellow ex-Beatle George Harrison featured (on half the tracks), along with another Beatles collaborator (creator of the ‘Revolver’ sleeve art) Klaus Voorman on bass, Nicky Hopkins on piano, and all of Alan White, Jim Keltner and Jim Gordon on drums plus King Curtis on saxophone.

‘Imagine’, the signature track, was written as a plea for world peace, unity and equality. It seeks a form of socialism with one country, one world and one people. “Imagine all the people, living life in peace…it’s easy if you try,” Lennon wrote, in one of the most quotable song lyrics ever written.

With its more polished sound and subtle strings, Lennon later said he regretted the production of the song stating it was “anti-religious, anti-nationalistic, anti-conventional and anti-capitalist” but, because it was “sugar coated”, people accepted it. 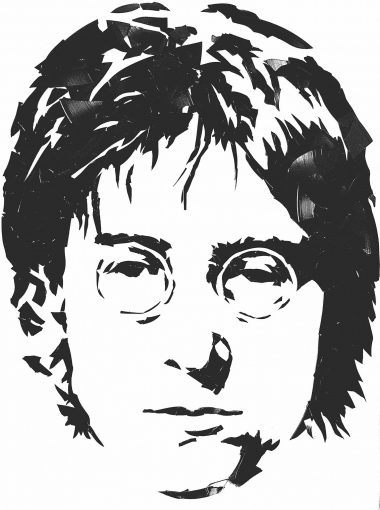 “You may say I’m a dreamer, but I’m not the only one,” John Lennon. Artwork by Kirk Whitehouse/Smashed Hits Broken Vinyl.

His haunting and simplistic piano chords of mainly C, C major 7 then F are one of the most memorable hooks in music.

It remains Lennon’s most successful solo song, having sold more than 1.7million copies in the UK alone and been performed or covered by more than 200 artists globally.

And who can forget the dreamy video for ‘Imagine’ with Lennon sat at his white grand piano in the huge white room at Tittenhurst, light gradually pouring in as Yoko Ono opens the shutters.

The lyrics to ‘Imagine’ had partly been inspired by Yoko Ono’s 1964 book ‘Grapefruit’ and also led the cover design for the album. Ono’s poem ‘Cloud Piece’ includes the line “Imagine the clouds, dripping, dig a hole in your garden to put them in.”

Lennon later reflected Ono should have had a joint credit for the song. “A lot of it – the lyric and the concept – came from Yoko… it was right out of Grapefruit.”

‘How Do You Sleep?’, however, had a much less peaceful and more spiteful tone. Annoyed by the apparent sledging of Ono and himself on McCartney’s album ‘Ram’, Lennon decided to retaliate in his most notorious swipe at his former song-writing partner.

“Those freaks was right when they said you was dead… The only thing you done was yesterday, and since you’ve gone you’re just another day,” Lennon opined in acerbic manner.

Hitting him right where it hurts, he mocked McCartney’s most famous songs ‘Yesterday’ and ‘Just Another Day’ while also referring to great conspiracy theory that he had died in 1966 and been replaced by a look-alike.

To rub salt in the wounds, George Harrison apparently endorsed Lennon’s sentiment as he plays slide guitar on the recording, overseen by Phil Spector – the producer who, in McCartney’s eyes, ruined ‘Let It Be’ while Ringo Starr, though not playing, was also present at the session.

Lennon later attempted to dampen the fires of ‘How Do You Sleep?’ by claiming it was “not about Paul.”

“I’m really attacking myself,” he said. “But I regret the association, well, what’s to regret? He lived through it. The only thing that matters is how he and I feel about these things…Him and me are okay.”

Lennon indulges his love of rock ‘n’ roll on the album on ‘Crippled Inside’ and ‘It’s So Hard’.

‘Crippled Inside’ opens with guitar picks that you think might will head off ‘Across The Universe’. Instead they depart into a bluesy folk-rock featuring piano trills and Harrison’s brilliant dobro playing, all topped off by a typically sharp Lennon lyric moralising that the soul within us is more important than our outward appearance.

‘It’s So Hard’ refers to Lennon’s struggles with attaining the utopian life he yearns for in ‘Imagine’. Another Bluesy number, it stars Jim Gordon from Derek and the Dominos on drums, The Flux Fiddlers on strings and saxophone licks from King Curtis of ‘Yakety Yak’ fame overdubbed on to it.

‘I Don’t Wanna Be A Soldier Mama’ – another rock ‘n’ roller – is sparse of lyrics, save to say it lists life roles Lennon doesn’t want to sign up to.

It’s the only track on the LP that gets the full Phil Spector “Wall of Sound” treatment, increasing the session musicians up to 11 plus the string section to get that expansive feel.

Protest song ‘Gimme Some Truth’ opens the B-side of ‘Imagine’ and had its beginnings during The Beatles’ ‘Get Back’ sessions.

‘Truth’ sees Lennon revelling in the use of witty wordplay to pour scorn on everyone and anyone from short-sighted hypocrites to pig-headed politicians. It remains one of Lennon’s most critically-acclaimed songs, having been covered by scores of artists including, more recently, Pearl Jam and Travis.

One of the best cuts from ‘Imagine’ is ‘Jealous Guy’, which became one of Lennon’s best-known songs and had started out life in India in 1968 as ‘Child of Nature’.

Openly addressing his failings as a husband and lover, Lennon lays bare his feelings in this catchy confessional.

Covered by more than 90 artists, Roxy Music recorded it as a tribute to Lennon and it became their only No. 1 in 1981.

Talking of cover versions, it would be near impossible for anyone to recreate the timeless sincerity of ‘Oh My Love’ which is a truly wonderful love song. However, Martin L. Gore does a good job of reinventing it as a spaced-out electronic version on his ‘Counterfeit 2’ LP (2003).

Which way am I facing?

Struggling to find purpose and meaning with his new-found artistic freedom post The Beatles, Lennon ponders how he might start to move on in ‘How?’ – a track that could have featured on Lennon’s debut album but instead gets a “candy coating”, complete with strings and Nicky Hopkins’ broken chord piano reverb style that permeates the whole album.

The ‘Imagine’ LP closes with the uplifting joy of ‘Oh Yoko!’ with Spector on harmonies. Capturing Lennon’s 24/7 love for Ono – he calls her name “in the middle of the night” and “in the middle of a bath” – EMI wanted it to be this tribute to Yoko Ono to be released as a single but Lennon refused, feeling it too ‘poppy’.

He even calls her name “In the middle of a cloud” and those fluffy white clouds are forming again, just like Ono’s ‘Cloud Piece’ poem which inspired the signature song of the album.

A Number 1 LP across the world on its release in 1971, ‘Imagine’ is as near as perfect a John Lennon album you will hear.

It captures with brutal honesty his life immediately post-Beatles – the feud with Paul McCartney, his unwavering love for Yoko Ono, protests and political songs, clever wordplay as standard and some good old rock ‘n’ roll to boot but, above all, it is a set of ten brilliant tunes from a song-writer, activist and musician with something to say.

• Check out James’ ‘L is for Lennon and my ‘Best Of’ playlist on Spotify at https://spoti.fi/3kAe3Kl 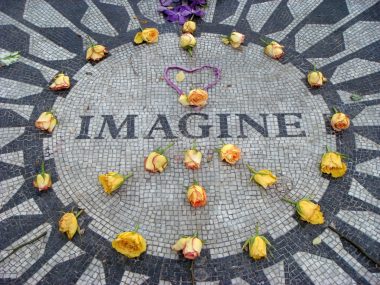