Recorded at the American Airlines Centre in Dallas, Texas last year, the two-day concert event was another big fund-raiser for Clapton’s Crossroads Centre for chemical dependency treatment, that he founded in Antigua in 1998. 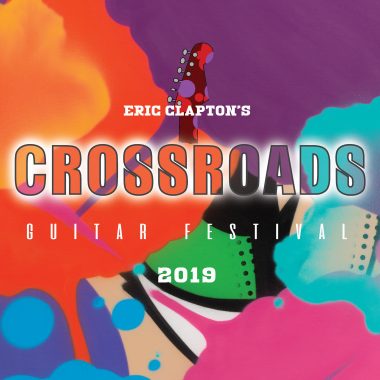 They were spoiled for choice, as this is a phenomenal display of guitar virtuosity in which Clapton is joined on stage by a luminary cast to help perform some of his best-known songs, including John Mayer accompanying him on the classic ‘Layla’, plus acoustic versions of ‘Wonderful Tonight’ and ‘Lay Down Sally’.

Robert Cray’s sultry rendition of ‘I Shiver’ sets a sensual mood while Peter Frampton’s collaboration on ‘While My Guitar Gently Weeps’ in tribute to Clapton’s late friend George Harrison sets a high bar for those who shared the stage.

Jeff Beck’s appearance for ‘Space For The Papa’, ‘Big Block’ and ‘Caroline, No’ reinforce the feeling this really is a masterclass of six-string aficionados.

James Bay represents the younger generations with aplomb on his more recent classic ‘Hold Back The River’ while the 12-bar blues vibe really takes hold thanks to the Tedeschi Trucks Band and their ‘How Blue Can You Get?’ and ‘Shame’ performances.

Stand out tracks come from old ‘Slowhand’ himself on ‘Badge’ before that performance of ‘Layla’ with John Mayer.

Grammy-winner Gary Clark Jr, a relative veteran of the festival now, is on another level on ‘Feed The Babies’ and ‘I Got My Eyes on You (Locked & Loaded)’.

A word too for the excellent Lianne La Havas. You can hear the crowd gasp on ‘Is Your Love Big Enough’. Ably covering ‘I Say A Little Prayer’, her voice and talent are certainly big enough to budge on to the billing with this ‘who’s who’ of guitar royalty.

There are big collaborations too, covering songs like The Stooge’s ‘I Wanna Be Your Dog’, (including the festival MC, actor Bill Murray) while Buddy Guy and Johnny Lang blend well on Guy’s vintage ‘Cognac’.

Featuring a spine-tingling tribute version of ‘Purple Rain’ in the encore (before Joe Cocker’s ‘High Time We Went’ closes the recorded set) you like to think Prince and Cocker would have been involved had they still been with us today.

Previous releases of this festival have sold out quickly (and gone on to be among the world’s best-selling music DVDs), and on this evidence – especially in a year so barren of actual live shows – this 2019 recording will follow suit.

* The festival, held every three years except in 2016, was the launch pad for the global ‘Turn Up For Recovery’ movement. Visit https://turnupforrecovery.org.