It marks the launch of Breaking New Ground, a 21-month project to digitise and explore the the history of constructing modern Britain through the John Laing Photographic Collection.

Around 2,000 newly-digitised images have been released on the Historic England website.

This is the first batch group of a total 10,000 images that will be made available to the public by autumn 2020, including archive photographs of the construction of Sir Basil Spence’s Coventry Cathedral in the aftermath of the Second World War.

The photos show how the city was gradually rebuilt between 1956 and 1962, following the November 1940 Blitz bombings which devastated the city and left the old medieval cathedral in ruins.

The entire project will include:

Speaking of the project Duncan Wilson, chief executive of Historic England, said: “We are delighted to bring to the public the fascinating John Laing Photographic Collection through digitising 10,000 images, which will be accessible to everyone through our website.

“The Collection offers unparalleled insight into the construction of 20th century Britain – covering everything from cathedrals, mosques and housing, to bus stations, bridges and motorways. We hope our “Breaking New Ground” project will shine a light on prominent and everyday British landmarks, and inspire the next generation to enjoy and engage in the built heritage all around us.”

View images from the Collection, share your experience on social media using #BreakingNewGround, tag @HistoricEngland and sign up to Historic England’s newsletter (historicenglandservices). 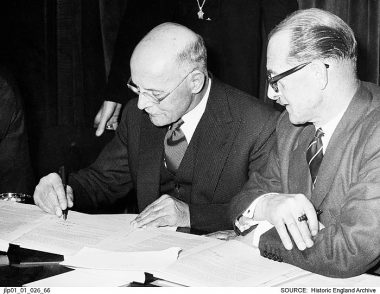 Doctors hit out at use of lateral flow tests in Warwickshire

Cubbington vicar will receive urgent surgery after more than £50,000 raised in five days