LAWN Bowls is widely considered to be a niche sport, however, the Birmingham 2022 Commonwealth Games represent one of the sport’s most prestigious events and, in Leamington, lawn bowls are most certainly king, writes Observer Sports Editor Aaron Sutcliffe.

The bowling greens at Victoria Park are regarded as some of the best in the country and are being showcased in all their glory throughout the week as Games fever sweeps over the town. 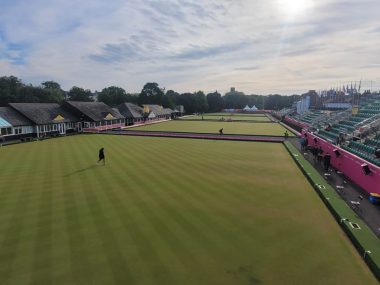 A view of the bowling greens at Victoria Park. Picture by Aaron Sutcliffe Copyright Bullivant Media.

And the arrival of television and camera crews only added to the excitement on the greens with each day a spectacle in its own right.

Albeit, few media personnel were in attendance on day seven of the Games at the venue which steadily filled up as the action progressed, in the first session, under blue skies with a slight breeze.

The day itself saw an array of Commonwealth nations take to the pristine greens with spectators warmly welcoming international technical officials and athletes alike despite the early 8.30am start.

Notably, over on rink nine, Niue Premier (head of government) Dalton Tagelagi was in attendance to watch his son in action against Northern Ireland, having taken part in the Men’s Pairs competition earlier in the week.

And the loudest cheer from the first set of matches was heard on rink seven as England’s Jamie Walker faced off against charismatic Fijiian Semesa Naiseruvati.

There was also action in the Women’s Pairs with Malaysia’s match against Malta taking centre stage on rink one on Green A in the first session in a game that lasted more than two hours.

The bowls and para bowls competitions are scheduled to be held from Friday, July 29 to Saturday, August 6 – with some 33 medals up for grabs.

And day seven’s action took place on two 40×40 metre greens with six rinks available to use on each green.

The 18.5 acre park was extensively landscaped and redesigned in 1899 to celebrate Queen Victoria’s Diamond Jubilee with further resurfacing of paths taking place in the build-up to this summer’s Games.

Lewis showing Will power as he bids for Commonwealth Games glory