Adams calls for winning mentality on the road from Valley 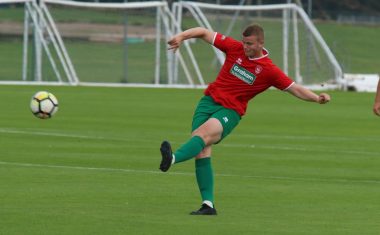 TOWN manager Carl Adams has challenged his Rugby side to be a tougher prospect to face on their travels.

With the ongoing national lockdown keeping Valley’s ambitions of establishing themselves as one of the front runners in the United Counties League Premier Division grounded, it offers an opportunity for non-league managers up and down the country to take stock of early-season performances.

And that is no different for Adams, who has led Rugby to sixth place in the table after ten games played and within touching distance of the sides that occupy the positions above them.

With six victories already on the board, the Town boss is keen to rectify blips in performance to give his side the best possible chance of success come the end of the unique 2020/21 campaign.

“It’s very much early days in the league at the moment, as we’ve only just completed a quarter of our fixtures,” said Adams.

“We are most certainly in the mix though, and whilst we had a couple of disappointing results on the road last month, there have also been plenty of positives to draw from so far too.

“We’ve been in great form at home – where we’ve been scoring goals for fun – but the defeats at Lutterworth and Rothwell were obviously a blow.

“To be fair, both those teams have made decent starts themselves and taken points in other games that may not have been expected at the start of the season.

“But we know that we have to be better at adapting to the conditions away from Butlin Road and generally we need to be a little stronger mentally too.”

It is the three league defeats which continue to irk Adams most, with a 2-0 reverse to leaders Shepshed Dynamo in the opening month the other loss along with those aforementioned, though all three came away from home.

And taking into account the fixtures that have been played so far, with four of the current top seven already faced on away soil, and Rugby’s current standing appears a lot brighter with a number of lower-half sides still to face.

Little time has been wasted during the downtime by the club, with the capture of Owen Bennett from Southern League Premier Central side Barwell adding to the standout transfer of Town legend David Kolodynski.

While the acquisition of Valley’s all-time top scorer will add to an already imposing forward line, it is the signing of Bennett – formerly of Solihull Moors’ academy – that was most decisive, with Rugby’s defensive options now bolstered as a result.

“We’ve added a couple of players already and I’m looking to add one or two more before the restart,” Adams added.

“The return of Jamal Clarke from injury will give us a bit extra on the physical side of things too.

“In some respects the shutdown may act as a positive as I guess it allows us to press the reset button and refresh the squad a little – but it also means we miss out on some games that I would have fancied us to win and also the chance to play a bit more at Butlin Road.”

With national lockdown restrictions set to be lifted next Wednesday, Rugby are currently in line to return to action on Saturday, December 5 when visiting Peterborough Northern Star.