THE beginning of the United Counties League Premier Division season this weekend is highlighted as the perfect opportunity to compound FA Cup misery by Rugby Town boss Carl Adams.

Valley fell at the first hurdle in the extra preliminary round on Tuesday night, going down 2-0 to Worcester City after Liam Lockett’s second-half brace in front of a 328-strong crowd at Butlin Road.

With no time left to mull over their cup heartache, ahead of a further seven games this month, Adams is confident of a successful campaign ahead. 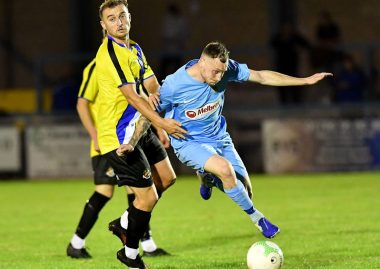 Lee Thomas bursts past his man. Picture by Martin Pulley.

“It’s been a long time coming but we are really hoping we can pick up where we left off back in March when I thought we were the form team of the division,” he said.

“I know how important it is for the club to make that step back up the pyramid again, and we will be working hard throughout the season to try and achieve that.”

Rugby were perhaps guilty of not being ruthless enough during a first half in which they enjoyed numerous opportunities, going close through Kurtis Revan from close-range – denied by who other than former-Valley goalkeeper Dan Jazeph – while Loyiso Recci nodded over from a promising position at the back stick.

“It was a decent game played at a high intensity and I thought we competed well on the night,” reflected the Town manager.

“But they scored at a crucial time in the game and unfortunately we just couldn’t find our way back from there.” 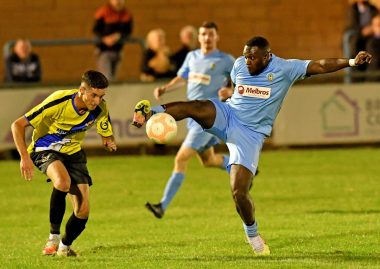 Danico Johnson challenges for the ball. Picture by Martin Pulley.

Making a debut on the night was goalkeeper Sam Lomax, with regular stopper Matt Hill on the bench, leaving Adams with a big decision for the number one shirt for the season opener against Pinchbeck United on Saturday (3pm).

As far as the rest of the team news is concerned, defender Jamal Clarke is hoping to shake off a hamstring strain that kept him out of the midweek cup tie, while Ryan Seal is a definite absentee for the next few weeks after suffering a dislocated elbow during pre-season.