Anderson dreaming of a Red and Green trip to Wembley 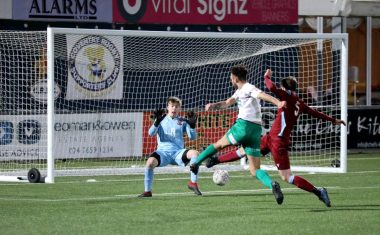 COVENTRY United boss Terry Anderson has challenged his side to continue their FA Vase exploits into the later rounds of the competition – on the back of Saturday’s second round victory over Abbey Hulton United.

The Red and Greens set up a third-round bout at Congleton Town on December 19, courtesy of goals from Josh O’Grady, Tyler Haddow and Riley O’Sullivan in a 3-2 success at Butts Park Arena.

And with a place in the last 32 of the Vase and £1,125 in prize money on the line for the victor in Cheshire, Anderson is daring to dream big.

“It’s very important, we’re at the top tier in terms of standard for teams that can play in the Vase, so we’re in with a decent shout and it’s the best opportunity we’re going to get to go and play at Wembley,” he said.

“When we look out for the Vase fixtures, it’s always a great opportunity to wonder if we could do it.

“Two teams get there at the end of the day, so why couldn’t it be us – we’re going to try our hardest.”