Awards served up for tennis aces 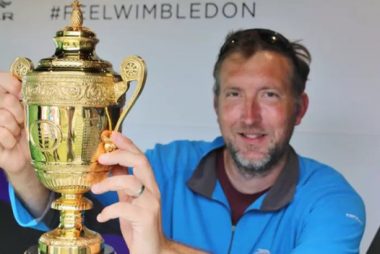 Tony Pillinger of Leamington Tennis Club, pictured with the iconic Wimbledon trophy, was named Warwickshire’s Referee of the Year.

A NUMBER of local tennis stars have been honoured in the Warwickshire Tennis awards for 2020, after a stellar year for the county.

Lucia Cassidy was one of the big winners of the virtual ceremony, scooping the Junior Player of the Year award following a highly successful year for the 14-year-old.

The Warwick Boat Club member lifted a Grade Two national singles and doubles title for her age group, before reigning supreme in Portugal with a Tennis Europe doubles success pre-pandemic.

Those victories were enough for her to be recognised and called up for Warwickshire’s County Cup team in the 18 and under category, proving dependable when called upon by beating Kent in her sole outing.

And she enjoyed a strong end to the year too, reaching two semi-finals in Grade Three 18U tournaments in September, before appearing in a number of Grade Two national events in October.

Warwickshire’s Player of the Year award went to 27-year-old Lloyd Glasspool, a member of Edgbaston Priory Club, who has recently propelled himself just outside of the top-100 in the ATP doubles rankings.

Those titles have underlined Glasspool’s progress in recent months, giving him his best-ever doubles ranking of 102 in the world.

Elsewhere, Wilmcote’s Toby Pearton has become the Young Volunteer of the Year for his contributions to Aston Cantlow Tennis Club.

The 15-year-old has only been involved in the sport for around three years, but has demonstrated plenty of commitment during that time both on and off the court.

A keen player, having previously participated in the Road to Wimbledon Championship, Pearton had regularly coached junior players at Stratford-on-Avon Tennis Club prior to the pandemic, all whilst recruiting more members to join Aston Cantlow and managing the club’s courts.

Warwickshire’s 14 and under boys’ County Cup squad were named the Team of the Year for their fund-raising efforts for the NHS during the first lockdown last year.

Amassing 170 miles in total during a virtual run that took place over two weekends, the team accumulated over £2,500 to help atone for the disappointment of missing out on the Inter-County Cup Championship that the boys were due to feature in.

And the accolades could continue to follow, after David Rawlinson – national president for the LTA – announced that the team had been nominated for the President’s National Award.

Another Warwick Boat Club member, Martin Durrant, took home the Senior Player of the Year Award, whilst Leamington Tennis Club’s Tony Pillinger was named the Referee of the Year.

“Tony’s widely recognised as one of the best officials in the country,” said Sherrie Meaking – chairman of the Warwickshire LTA.

“He’s always running fantastic tournaments and despite these uncertain times, his great communication and thoughtfulness has made the experience very enjoyable for players and their parents.”