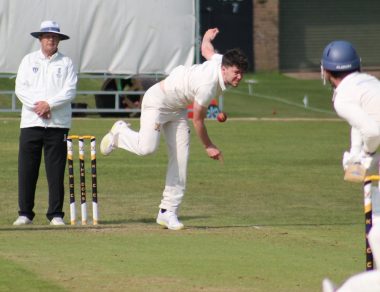 In securing another 20 points on the board, the second-placed Wardens have cut the deficit to Birmingham & District Premier Division Two leaders Halesowen to a single point, in part to a number of fine showings from Kenilworth’s consistent performers.

Fielding first after winning the toss, Wem were bowled out shortly before their innings was due to come to a close for 209 runs scored, a total that the visitors overcame with three overs to spare.

Assessing the encounter which yielded Kenilworth’s fifth win this term, Johnson highlighted a collective effort from his side’s bowlers, and star man Baker, to swing the pendulum in their favour.

“I thought 209 was about par, Wem looked as though they were on their way to a commanding total until a run out from Henry Cullen changed the direction of the innings,” said the Wardens captain.

“With Josh building pressure and the seamers operating from the other end, we reined them in well.

“We got off to a fairly modest start with the bat, but Ali [Zaryab], Andy [Leering] and Josh then showed excellent game awareness to get us over the line.

“Josh has been really good so far this season, he’s extremely reliable with the ball, and gets drift, turn and bounce out of most surfaces to challenge both edges – he’s a real handful for any batter.

“The way he batted with some of the cleanest striking you’ll see shows he’s quickly turning into an excellent all-rounder.”

After Jazez Weale (2-56) took his and Kenilworth’s first wicket of the afternoon in dismissing Sam Peate (0, lbw) at 12-1, Wem eventually found their way with some solid batting between opener Harry Chandler (38) and number three Mohit Kale (59).

The pair partnered for 59 runs in all, much in part to the latter smashing ten balls into the boundary.

But when Cullen ran out hit-man Kale at 118-3, Wem’s run rate soon slowed.

Useful totals from Matthew Cohen (22) and Craig Heath (24) were as good as it got for the hosts from that moment onwards, with Kenilworth’s Tommy Rex (3-42) and Tom Mordey (3-31) coming into their element as the innings wore on.

In reply, the Wardens looked unconvincing at 87-5 until the sensational partnership of 74 between Zaryab (66) and unbeaten Andrew Leering (46, no) produced some memorable moments en route to victory.

With Wem putting on the pressure, it was up to Baker (30, no) to see the visitors over the line in the space of just 18 balls.

For Kenilworth and Johnson, the task at hand now is to dislodge the league leaders in Saturday’s clash at Glasshouse Park.

“We are only separated by one point at the top of the table after they bowled Dorridge out for 50 this week, so we’re all really looking forward to another tough challenge,” added the Wardens skipper.