BOXING: STAR Leamington boxer Lewis Williams will focus all of his attention on next year’s Commonwealth Games in Australia after being called up to Team GB.

The teenager received his national call up last week after completing a brutal four-day assessment with some of the country’s most promising heavyweight fighters in Sheffield.

His hard work and determination shone through as Williams was selected by Team GB to take part in GB Boxing’s ‘Podium Potential’ training camp, which starts on Wednesday, September 6.

The Podium Potential camp is one step below the GB World Class Programme, which could lead to an appearance on the global stage at the Commonwealth Games in Brisbane next year.

Clearys Boxing Gym coach Edwin Cleary told The Observer that ‘the hard work starts now’ for Williams as he prepares to train with some of GB’s top athletes on a regular basis.

He said: “I’m over the moon for Lewis, his family, and all at Clearys Boxing Gym.

To say I’m a proud coach would be an understatement. But to say I’m shocked would be a lie.

“This has been coming and is no shock to me or our coaches. In six months, Lewis has gone from the Youth World Championships to being No.2 in England.

“Taking a youngster from skills bouts to GB is a amazing achievement and the gym’s biggest achievement to date.

“It’s already breathing more belief into an ever growing squad at Clearys that are in the right place to achieve their dreams. It’s opened a door and will push them harder.” 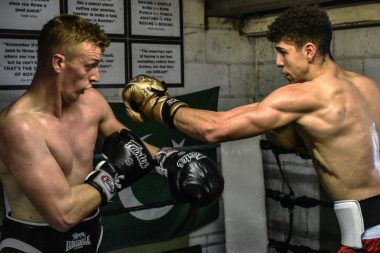 Based in Whitnash, Lewis has experienced a successful year in the ring, with his only low coming at the Elite Championships in Rotherham when Williams lost out to Natty Ngwenya in the quarter finals by a split decision in only his fourth fight as a senior.

His success has sparked Clearys Boxing Gym into life, and coach Edwin hopes he can use Lewis’ success to benefit the other aspiring fighters that train at the gym.

“I’ll be picking his brains to see what GB are teaching him so we can use it with our other boxers,” said Edwin.

“All of his hard work and dedication has made Lewis one of the most naturally gifted and talented heavyweights for years.

“I won’t be having sleepless nights with this young man. He’s a winner and is already focused on next year’s Commonwealth Games in Australia. I’d bet my house he can get there.”

Lewis has set a fine example to some of Clearys’ aspiring fighters.

The youngster trains twice each day and opts to run through town to the gym rather than making his way through traffic in a car.

“Walking into Clearys was one of the best boxing decisions Lewis has made. He loves how we teach and believes in our system.

“I believe this is the start of an illustrious career.

“If he develops as much and as quick as he can he will get to the very top I’m sure.

“He needs to keep his feet firmly on the ground and train like a contender. He’s only at the start of this race, and the future is the finish line.

“He’s a credit to his family who help drive him around the country.”