LEAMINGTON will need to be ‘up for the Cup’ when they bid to reach the final qualifying round of the FA Cup on Saturday.

Paul Holleran’s side will have home advantage on Saturday but their visitors Kettering Town also play in the Vanarama National North.

The Brakes head into the tie after a 1-1 draw away to Hereford last Saturday, though it could have been three points had they not conceded two minutes from time.

Jack Edwards’ goal had given Leamington the lead at Edgar Street but Hereford’s second-half performance earned them a deserved share of the spoils.

Boss Holleran opted to stick with the same squad which travelled to Alfreton the previous Tuesday evening, and they were fortunate not to fall behind inside the opening couple of minutes, Jake Weaver having to react smartly to deny Ben Pollock and then Levi Andoh lashed a rising drive over the bar.

Leamington had the ball in net when a free-kick was lifted into the penalty area, Jack Lane heading against the bar, but while Kelsey Mooney put the loose ball into the net the assistant referee had already raised his flag.

Edwards then had a volley deflected over the bar. 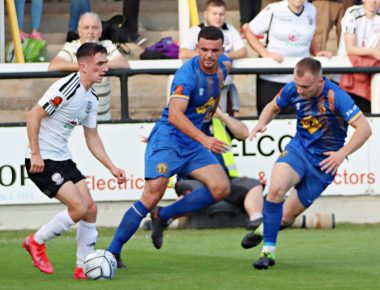 But Leamington got their reward to go in front on 38 minutes. Joe Parker flighted a free-kick into a crowded box,and Edwards came in at the far post to head back across goal into the net.

Bulls keeper Brandon Hall was forced into a save early in the second half after Mooney met Steph Morley’s cross, and Dan Meredith’s cross clipped the top of the bar while Parker was also denied by the keeper’s parry.

But Hereford cranked up the pressure on the Brakes defence, Dan Smith sending a cross from Maziar Kouyhar just wide and Harry Pritchard sending a long-range curling effort drifting just past the far post.

It was beginning to look as though Leamington had done enough to hold out for all three points but they finally buckled with two minutes remaining when Smith powered home an equally impressive header from a great ball in from Kouhyar.