FOOTBALL: BRAKES made a winning start to their National League North campaign on Saturday, defeating Gainsborough Trinity 2-1 away from home.

A brace from Ahmed Obeng helped Paul Holleran’s men secure three points on the opening day of the season as they came from behind to deny the home side any reward from their efforts.

A strong start from the hosts was dealt with by Leamington’s defence as neither side many a significant impact in the opening minutes of the game.

Trinity were ahead 18 minutes into the game though was Worsfold went clear down the right channel.

With only Brakes’ keeper Breeden to beat, Worsfold calmly struck his shot under Breeden with the outside of his right boot to put the home side a goal up.

Worsfold had the ball in the net again minutes later as he steered a left wing cross in off the underside of the bar, but the offside flag cut short his celebrations.

Leamington regrouped after a shaky start and were soon level on 27 minutes when Rob Thompson-Brown collected the ball in midfield from Callum Gittings’ header.

Thompson-Brown slipped a pass to Ahmed Obeng whose low shot went into the bottom corner.

Brakes almost repeated the trick moments later from an identical position, however Walton got a hand to the ball as Junior English drove across goal.

Worsfold continued to provide Leamington’s defence with problems when he almost restored Trinity’s lead when Nathan Jarman beat Jamie Hood down the left before firing low into the six-yard box. 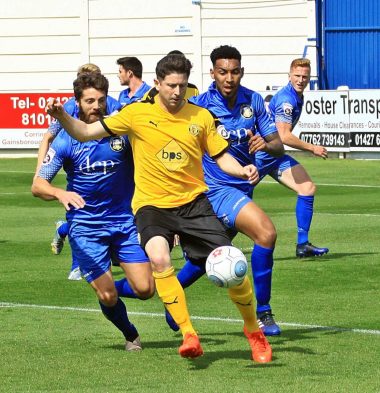 Worsfold appeared to stab the ball just over the line before it was cleared by Connor Gudger, but a foul was awarded.

The half ended when Gittings and Craig King found themselves in the book following a foul on the edge of the Leamington penalty area.

Gainsborough started the second half with intent when Jarman’s attempt to lob Breeden proved the closest either side came to scoring at the start of the second half.

A first corner of the game for Leamington close to the hour mark took several attempts for Gainsborough to clear, but Leamington’s persistent pressure eventually paid off.

Obeng bagged his second goal of the game on 72 minutes when the forward pounced on a defensive error to round keeper Walton and slot home a strike from a tight angle.

Trinity fans soon started to make their frustration clear as Walton almost presented Brakes with a chance of a third goal when he sliced a clearance straight to Thompson-Brown, who failed to find Bishop with the subsequent cross.

Richards then put his laces through a decent effort following a half cleared corner, but that was as close as Gainsborough came to a leveller as Leamington used their heads and saw out the remaining moments of the game.

A delighted Paul Holleran said: “All wins are hard earned in this league and away wins are even harder to come by.

“To start with three points and the manner in which we won them was fantastic.”

Brakes are next in action tomorrow night, August 8, at home to Tamworth. Kick-off at 7.45pm.