LEAMINGTON kick off their FA Cup challenge on Saturday, buoyed by back-to-back wins in the National League North.

Manager Paul Holleran will remind his players that they cannot afford to underestimate minnows Stone Old Alleynians when they visit the Your Co-op Community Stadium for Saturday’s second qualifying round.

But they head into the tie against the Midland Premier visitors, who have reached this stage for the first time, on the back of an excellent 2-0 victory against Boston United. That followed a 2-1 win against Gateshead last midweek.

Holleran named an unchanged side and they were soon into the groove. Simeon Maye’s free-kick was inches wide and Boston keeper George Sykes-Kenworthy denied Dan Turner and Kelsey Mooney with smart saves.

Leamington wasted a golden chance to go ahead when Mooney’s penalty was saved by Sykes-Kenworthy in the 63rd minute. But the breakthrough came five minutes later, Mooney redeeming himself by heading home Joe Parker’s inviting cross to finish off a swift counter-attack instigated by Turner.

Boston tried to rally but conceded a second four minutes from time. Kenworthy-Sykes was left stranded outside the area and sub Kaiman Anderson nipped in to snaffle possession, skip past a defender and drive a low shot into the net. 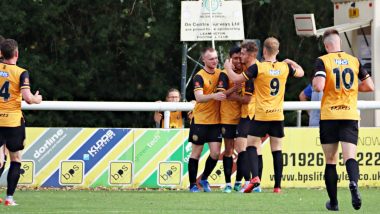 Kaiman Anderson is mobbed after scoring for the Brakes. Picture by Sally Ellis.

The Pilgrims were well and truly sunk in injury time when Tom Platt was sent off for a foul on Junior English as he homed in on goal.

Meanwhile, the Brakes have cut ticket prices for Saturday’s cup tie against a Stone side who have defeated Racing Club Warwick, Rugby Town and Anstey Nomads. For more, visit leamingtonfc.co.uk

SCOTT Easterlow’s return as Racing Club Warwick couldn’t inspire them to their first league win of the Midland League Premier Division season after a 2-0 defeat at Romulus on Monday night. An own goal and a strike by former Racer Trea Bertie sent them to defeat.

Easterlow, who took over after Jason Pyott’s departure, will return to Townsend Meadow on Saturday for the home game against Wolverhampton Casuals.