Briggs excited for the future with Bears 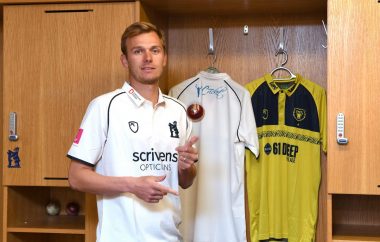 Danny Briggs has signed a three-year deal at Edgbaston Stadium.

The 29-year-old slow left-arm orthodox bowler has registered 568 wickets across all competitions during his 11-year professional career, winning two T20 Blast titles and a One-Day Cup whilst with Hampshire.

Amongst his accolades to date, he has also won seven T20 International and one One-Day International caps for England, making his T20I debut at Edgbaston in a victory over South Africa in 2012, going on to play in the ICC World T20 in Sri Lanka later that year.

And after completing his move to Edgbaston, Briggs says now was the right time to make a move.

“I’ve had a great time at Hove over the last four years, but I’m delighted to make this move and join Warwickshire and the Bears,” he said.

“I like Paul Farbrace’s exciting vision for the Club, and it aligns with what I would like to achieve in the coming years.

“I’m looking to be part of all format success and I haven’t given up a strong desire to play at the highest levels again.”

Sport Director at Warwickshire, Paul Farbrace, talked up the new acquisition, adding: “For several years Danny has been widely recognised as one of the leading spinners in the county game and he is an excellent addition to our squad.

“His record in T20, in particular, is outstanding as the leading wicket-taker in the history of the Blast with 172 wickets.

“However, Danny is vastly experienced across all three formats of the game and he knows what it takes to win trophies, having previously been part of teams that won both white ball competitions.

“We look forward to welcoming him into the Bears squad when the training programme for the 2021 season gets underway in November.”