CLAVERDON RFC’s unbeaten start to the season continued after a strong first-half performance propelled them to a 36-0 win at Chaddesley Corbett.

Following a dramatic late victory against Bedworth in their last outing, it was important that Claverdon got off to a fast start. They duly obliged with some early pressure leading to Turrell breaking the Chaddesley line to score under the posts, with captain James Williams converting the extras.

Buoyed with confidence after the early score, Claverdon continued to play expansively with strong running from Chris Calcott setting the tone. Resulting territorial pressure led to two further tries in quick succession, the first a well worked line-out five metres from the Chaddesley line which allowed flanker Byrd to stretch and score.

The game became scrappier as the first half went on, as both teams struggled for momentum. but Claverdon did manage to add one more score before the half-time whistle. 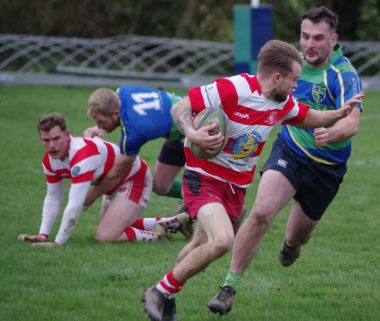 Claverdon’s Dan Sibley fends off the Chaddesley opposition. Picture by Will Barnes.

A tap penalty from Ben Husthwaite, followed by quick passing down the back line resulted in a well-taken finish in the corner by full-back Evans to leave Claverdon 22-0 ahead at half-time.

Chaddesley came out a much-improved side in the second half and nearly pulled a try back immediately after the break. Only a strong last-ditch tackle from Marc Spencer prevented a Chaddesley player from grounding the ball in the Claverdon in-goal area. 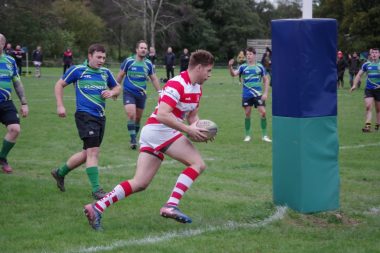 Sam Turrell gets across the tryline for Claverdon at Chaddesley. Picture by Will Barnes.

Following an excellent defensive effort, Claverdon were finally able to claim some territory in the Chaddesley half, and made it count. James Williams took an opportunity to scythe through the Chaddesley midfield and offloaded well to Garner-Jones who scored under the posts. 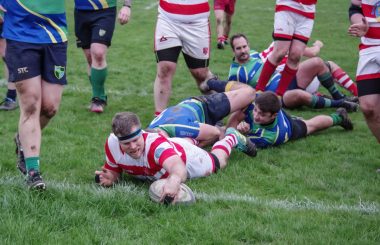 A determined Charlie Byrd stretches over for a try. Picture by Will Barnes.

Once again Claverdon were forced to defend well, with Charlie Wakelam especially displaying an excellent work rate to keep out the Chaddesely attacks. Claverdon finally took an opportunity to clear their lines when a dropped ball was hacked clear. The resulting chase and turnover in the opposition half allowed James Barton to feed Turrell for his second try, and the final score of the match.

Claverdon’s next league game is on November 20, when they welcome Upton-on-Severn to Ossetts Hoke Lane.