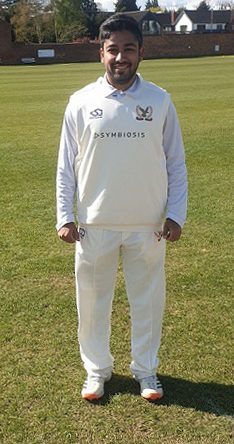 KENILWORTH Wardens’ new overseas signing Ali Zaryab enjoyed a fine debut but it was Leamington skipper Oliver Currill who stole the show to guide his side to a six-wicket win on Sunday.

In the final pre-season friendly for both Birmingham & District Premier League clubs, Division Two Kenilworth were dismissed for 232 in the 39th over after ex-Pakistan under-19 star Zaryab smashed 83 from 79 balls before eventually being stumped by Daniel Williams – one of six to either be caught or stumped that afternoon by the Leamington wicketkeeper.

James Vaughan was also in imperious form for the hosts at Arlington Avenue, taking four wickets for 49 runs to skittle the Wardens’ mid-to-lower batting order.

A steady start from Cameron Mitchell (10) and Joseph Somra (30) put on 49 in the opening stand for Division One side Leamington before the former’s dismissal.

The arrival of Currill (82 not out) at number four really got Spa going, building a solid partnership with Daniel Williams (33) to edge their side close to the 200-run mark.

With Williams falling at 198-4, bowled by Kenilworth’s Josh Baker (2-59), the Leamington captain saw out victory with Nick Couzens (7 no) to claim Spa’s first pre-season victory at the third and final attempt.

Both sides are on the road in their respective division openers on Saturday, Leamington heading to Shifnal, while the Wardens visit Bridgnorth.