FOOTBALL: A GRITTY pre-season performance from Racing Club Warwick earned them a hard-fought draw against Leamington on Tuesday as night as both clubs shared the Tony Horley Cancer Charity Cup.

Hosted for the first time, the cup match helped raise vital funds for Myton Hospice – while offering a chance to players from both sets of teams to stretch their legs before the season proper starts in less than a month.

Leamington dominated early parts of the game before a woeful defensive error from Brakes keeper Tony Breeden set Louis Bridges the simple task of scoring into an open goal as the home side took a surprise first-half lead. 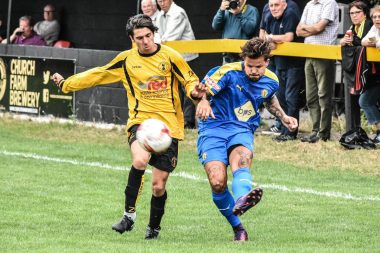 Brakes continued to pile on the pressure at the other end as Racing Club Warwick struggled to break into Paul Holleran’s sides half.

A corner from the right then met the head of Brakes man Joe Magunda, but his effort was cleared off the line by Jack Taylor at the back post to maintain Racing’s precious one-goal lead by half-time.

Continued pressure from Brakes throughout the second-half saw Racing Club Warwick restricted to just a handful of chances.

But those chances caused Brakes’ back four – and goalkeeper Breeden – multiple problems with Racing looking dangerous on the counter attack. 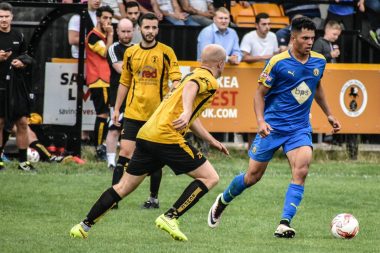 Multiple penalty appeals went against Brakes, however in the 71st minute the referee pointed to the spot when a dangerous high-challenge on Obeng was noted.

Thompson-Brown made no mistake from the spot to equalise.

Late efforts for Brakes saw the ball pin-ball around the box before the game came to an end with the score at 1-1 – Racing Club Warwick ending the game pleased with their defensive work.