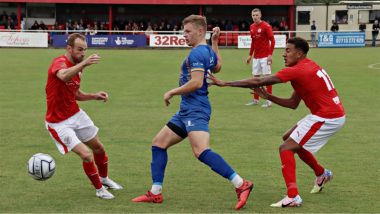 Paul Holleran’s men went into the clash at St James Park on a high having beaten Spennymoor Town 2-1 in their delayed season opener – a result of COVID-19 cases within the Brakes camp – just two days earlier, but had that feel-good feeling wiped out in Northamptonshire despite Junior English’s late consolation.

It was very much a slow start by the visitors in Northamptonshire, who struggled to get a foothold in the game in the opening stages, going behind after just four minutes when Ndlovu beat Leamington custodian Jake Weaver with a header inside the near post.

With the breakthrough giving Town added confidence and greater control of possession, it would take until the 22nd minute for the Brakes to have an impact down the other end of the pitch.

Dan Turner’s rushed finish inched past the post when being in a prime position to score, but prompted the away side to up the ante – as further chances from Simeon Maye, who threatened with a stinging volley and then a header straight at Danny Lewis, followed.

That flurry of missed chances proved costly however, as Brackley doubled their advantage six minutes before the break through Lowe’s dinked finish from a tight angle.

Matters could have been made worse after the interval, had Ndlovu’s effort not hit the woodwork, as Leamington held on for dear life.

But there would be a lifeline provided three minutes from time, in the form of an instinctive Junior English backheel that gave the Brakes unexpected hope.

While a late surge in search of an equaliser expectedly followed, Leamington were unable to pose any further threat of note to fall to defeat.

In Saturday’s win at the Your Co-Op Community Stadium, quickfire goals from Turner and Jack Edwards sent the Brakes on their way to their opening win of the 2021/22 season – in spite of Rob Ramshaw’s late header – in a performance that Holleran and Co. will hope to replicate at home to Curzon Ashton on Saturday.