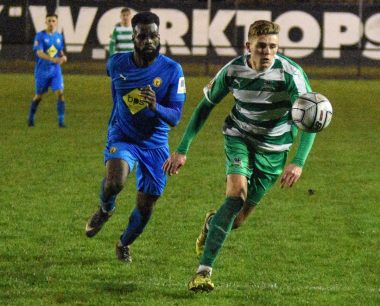 The Brakes went three-and-a-half weeks without a fixture prior to their stalemate at The Citadel in West Yorkshire, due to COVID-19 cases in both opposition and Leamington’s camp, but returned with a hearty display that gave Holleran’s side a first point in the National League North at the third attempt.

And with the news that Thursday’s second national lockdown will not pose further disruption to Leamington’s season, the Brakes manager says his troops must now kick on ahead of six further fixtures this month.

“You could argue with the chances and possession we’ve had we deserved to win it,” said Holleran.

“That’s two encouraging performances away from home now, and it’s great that we’ve got something to show for it tonight.”

Lining up in midweek was Kaiman Anderson and summer arrival Lance Smith – both making their first starts this season – as the two changes for Leamington, who hoped to hit the ground running on their return to competitive action.

What they did not expect was to find themselves behind after just six minutes, albeit with goalkeeper Jake Weaver left with little chance by Jordan Richards’ stunning strike.

The full-back swiped a free-kick into the far corner of the net from the edge of the penalty area with real panache, giving the Celts a dream start.

Smith starred as a focal point for the visitors as the game approached half-time, setting up attempts at goal for teammates Simeon Maye and Junior English.

While there was no response from Leamington before the break, inroads to a leveller were made in the second period when captain Joe Clarke fizzed an effort just wide of the mark, followed by Smith’s shot that travelled agonisingly past the past from Sam Osborne’s flick on.

Steven Drench then performed acrobatics to parry away Danny Waldron’s goal-bound effort as the visitors cranked up the pressure.

With time running out, it would have been easy to have feared that an equalising goal was not going to suffice.

But with just two minutes remaining, the Brakes had the goal that their play had merited.

Jack Edwards was on hand to poke the ball home high into the roof of the net after Drench had kept out an initial effort during a goalmouth scramble, lifting his side out of the relegation zone in the process.

The matches will continue to come thick and fast from here on in, with a trip to Kidderminster Harriers’ Aggborough Stadium next up on the agenda on Saturday (3pm).

It will be a task easier said than done against Russell Penn’s team, who have collected three wins from four to sit in the play-off places at present.