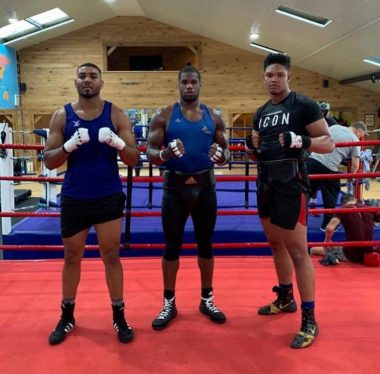 CLEARY’S boxer Matthew Harris says he will benefit enormously from the experience of working with heavyweight Daniel Dubois – ahead of the latter’s British, European and Commonwealth title fight next month.

Fellow heavyweight Harris, 20, received the call last week to help Dubois step up preparations for his bout with Joe Joyce on November 28, an invitation that he could simply not turn down.

“It was exciting to get a call and I jumped at the chance to work with one of the best heavyweight’s on the planet,” said Harris.

“Daniel’s where I want to be, and watching him at work and sparring him each day will really help with my career.

“He’s a great guy and I was asked to stay another week, so I will be joining him again next week.”

Martin Bowers, who coaches Dubois, was looking for a fighter of a suitable frame to join the camp – and they do not come much bigger than six-foot, eight inch, 120kg Harris.

Cleary’s head coach and owner, Edwin Cleary, spoke highly of his fighter, adding: “Daniel’s a tough ask for any heavyweight, but Matt took it in his stride and will develop so much from these experiences.

“Afterwards, Bowers even said that Matty is quick, and has great feet for a big guy.”