THE CHANGES at the Phillips 66 Community Stadium are coming thick and fast as Leamington gear up for their forthcoming National League North kick-off at the beginning of October. 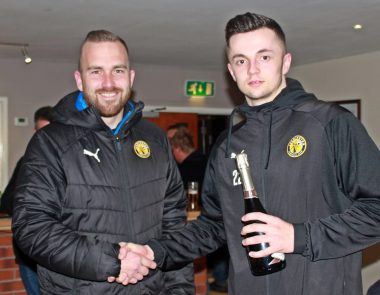 And while incomings as far as the playing staff are concerned, manager Paul Holleran has been busy reinforcing his backroom team with the addition of Chris Knott as first team coach.

33-year-old Knott is no stranger at the club, having been involved with the academy as the Head of Youth and more recently with the first-team set-up last season, but now takes on an official role that will see him provide more assistance to Holleran.

The move comes in the wake of the temporary departure of Tom James due to family commitments, but affords Knott the chance to build on an impressive CV.

After a ten-year goalkeeping career at Knowle, he then went into management with the club’s reserves before becoming first-team assistant manager at the Solihull-based side.

A season later, Knott became the manager of the Hampton Road outfit, where he spent two years before bolstering his coaching qualifications with a UEFA A licence in 2018.

Further to that, analyst and first team coach stints at Lowestoft Town and Heather St John’s followed prior to linking up with the Brakes, with Holleran keen to sing the praises of his new colleague.

“Chris initially came to the football club to assist with setting up the academy and other sorts of things with Mark Fogarty, he got involved with the first team at the back end of last season, and to be honest we sort of hit it off really,” said the Leamington boss.

“Obviously with Tom James having to step away at the moment due to family commitments the opportunity arose for Chris to step in – the door is still open for Tom but at the moment it’s not possible for him to commit to the role.

“Chris has done a lot of good work at the football club.

“As well as being a very capable coach and a very good professional person it also links the club up a bit more, which is something that I’m keen to develop.

“Chris is a very good addition, and to be honest I think he’s got a very bright future, so we’re delighted to have him on board.”