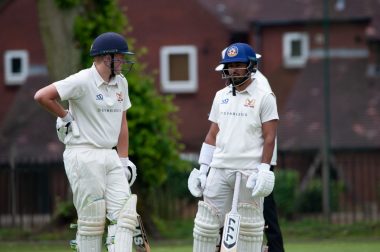 From left: Ben Rex and Ali Zaryab provided plenty of firepower, but Kenilworth were unable to see the job through. Picture by Neylan Chaudhary.

The Wardens lost out by a single wicket in a closely-fought affair at Old Church Road, on a day when Zaryab (59) and Rex (61) provided the X factor for the visitors with a fifth-wicket partnership of 115, en route to a final score of 183.

For Johnson, the difference lay not in a batting or bowling error, but in the pre-match toss.

“We lost an important toss in damp conditions, but we battled hard and the partnership between Ali and Ben put is in a good position,” said the Kenilworth captain – in reference to Harborne’s decision to field first.

“Ben has been brilliant in the past couple of games by making a couple of 60s – he’s always been an accomplished player and he’s added an element of power to his game which now allows him to feel at home in the middle order.

“Unfortunately, we were not able to capitalise on this foundation and we were a few short at half-way.”

Acknowledging Kenilworth’s batting strength, the captain was also quick to heap the praise on the fielders and bowlers on away soil.

“It was great to see our seamers running in hard and taking early wickets, we held our catches in the opening overs to get them five down quickly,” Johnson added.

“We kept chipping away, so it was extremely frustrating that the tenth wicket put on over 40 to win the game.

“We had a couple of sharp chances in the field, which on another day would have stuck, but unfortunately it didn’t happen for us and we ended up on the wrong side of the result.”

It was very much a struggle for Kenilworth last weekend after slipping to 46-4 in the 14th over, until the aforementioned pairing of Zaryab and Rex combined for a score that changed the complexion of the innings.

Hitting 15 balls into the boundary between them, the visitors still looked in good shape despite Rex falling at 161-5 – one of five batsmen to be claimed by Jasper Davidson (5-54) that afternoon.

But from there a complete collapse was in store, as Harborne rattled through the remaining batsmen to keep the Wardens below the 200-run mark.

The reply issued by Harborne was not a convincing one by any means, and at 85-6 many would have been fearing that a straightforward win was in store for Kenilworth.

But with middle-order man Tejas Wagle (40), and the tailender duo of Alex Kirkpatrick (28) and Henry Arnold (11) standing their ground, the hosts made it over the line to stun the away side.

Ollie stars as Leamington put on their Sunday best

Wardens hold their nerve to edge another thriller