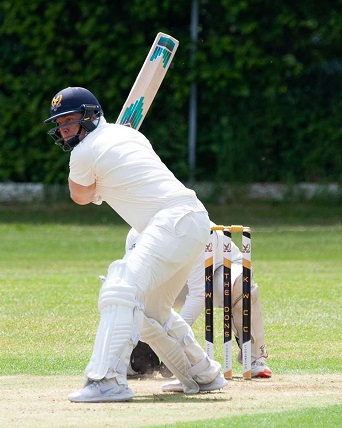 Nick Seager was in form for hosts Kenilworth.

THE RACE for the Birmingham & District Premier Division Two title continues to hot up, as Kenilworth Wardens closed the gap to leaders Halesowen by edging out Wem by four wickets.

While the Wardens were in action at Glasshouse Park, an abandonment between the table-toppers at Dorridge meant there was a real opportunity for Dan Cohen’s side to make up considerable ground with just three fixtures of the season remaining.

And they do not come bigger than Saturday’s meeting between the two sides at Halesowen’s Seth Somers Park – a fixture which could well decide the direction of this year’s title irrespective of the two matches that follow for both sides.

In the only fixture to survive the weather, Kenilworth fought to reach their 131 revised target score in the 34-over battle with Wem last weekend, having dismissed the visitors for 139 in the 32nd over.

The away side recovered from losing opener Sam Peate (4, lbw) at 5-1 by putting on a stand of 50 runs, a total racked up by hot-shot Harry Chandler (64) and number three Mohit Kale (15, lbw).

While the latter was seen off by Tom Mordey (1-28), a third-wicket partnership of 39 runs between Chandler and Oliver Cooper (20, lbw) suggested that Wem could continue could slowly but surely continue to build their total.

A couple of Andrew Leering (2-27) wickets and the dismissal of Chandler by Tommy Rex (3-44) at 119-5 quickly set the rot into Wem’s challenge however, with Ali Zaryab (2-7) also getting in on the action to help Kenilworth end the innings in quickfire fashion.

Although the Wardens did not start in convincing fashion at the crease, losing opener Keith Bell (5) and number three Zaryab (3) at 29-2, the presence of Nick Seager (60) and Harry Johnson (28) at least helped propel the hosts towards their target score – the pair putting on 54 runs for the third wicket.

While Seager was eventually dismissed at 129-4 by Andrew Harrison (3-30), Kenilworth were just moments away from victory despite also losing Henry Cullen (15) and Ben Rex (0) in quick succession, duly doing so when captain Andrew Leering (4, no) secured victory with a hit into the boundary.

Batting first after Kidderminster won the toss, the hosts were limping considerably at 72-6 as Liam Weston (3-25) stole the show with a string of top-tier deliveries.

That all changed when Chris Calcott (68) and Oliver Currill (66, no) came to the fore, smashing 100 runs between them to ramp up Spa’s score.

With Currill continuing Leamington’s run chase with tailender Tom Warner (11, no), the hosts surpassed the 200-run mark to leave Kidderminster a more considerable challenge than first imagined when finishing on 219-7.

For all of Kidderminster’s early promise in laying a solid foundation to reach 134-4, their reply quickly lost momentum when Nabeel Asghar (2-56) and Craig Miles (3-33) ramped up the pressure with a string of dismissals to stunt the visitors.

Surviving the innings but not having enough to reach the 217 revised target score inside the 36 overs provided to them, Kidderminster were successfully beaten to breathe life into Leamington’s aspirations of silverware.