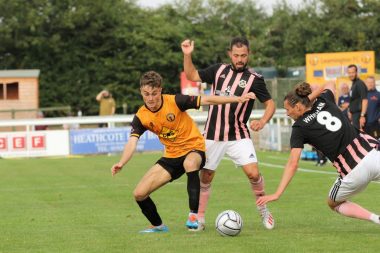 With two wins and two losses to start the new National League North season, Leamington have displayed plenty of promising signs that they are capable of building on the successes of the short-lived Covid-hit 2020/21 season.

And another reminder of the capability of the current crop was provided on Tuesday against the Heed at the Your Co-Op Community Stadium as the hosts came from behind to reply to Cedwyn Scott’s 16th-minute opener.

Meeting a Macaulay Langstaff delivery, the Heed forward blasted a strike low and beyond the reach of goalkeeper Jake Weaver to stun the home crowd.

Gateshead’s goalscorer could and perhaps should have doubled the visitors’ advantage before the break when finding himself well placed to score, in a moment that ultimately swung the pendulum in Brakes’ favour.

Mooney was on hand to meet a pin-point Joe Parker free-kick whipped deliciously into the penalty area on 58 minutes.

Mike Williamson did his best to inflict immediate damage on the hosts with a drive goalwards that required saving moments later. But it was to be Leamington’s day when Lane headed home from a set-piece with 17 minutes to play.

Sitting in 13th place, the Brakes take on Boston United, who lie in tenth, in their third successive home league fixture this Saturday.