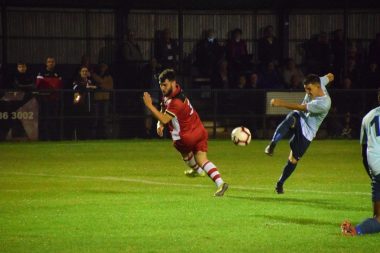 The Midland League Premier Division hosts were rocked by two goals in the final ten minutes of the game from their Northern Premier League opponents, in a tightly-contested contest that could have gone either way.

Sphinx now aim to get a foothold in the league, having only played one game to date, when hosting Racing Club Warwick on Saturday (3pm), before visiting Worcester City on Wednesday (7.45pm).

Meanwhile, fellow Premier Division side Coventry United will return to the pitch in their home encounter with Tividale on Saturday (3pm), having been out of action for two weeks due to playing and coaching staff displaying COVID-19 symptoms.

As a result of the setback, last weekend’s league clash with Long Eaton United was postponed, adding to the disappointment of having to withdraw from this season’s FA Cup preliminary round tie with Evesham United.

Terry Anderson’s side then visit Romulus on Monday (7.45pm), hoping to put their early-season troubles behind them.

Tuesday night’s Division One derby between victors Coventry Copsewood and GNP Sports was decided by Eden Mukenge’s penalty in a slender 1-0 victory at Allard Way.

The Copsewood forward dispatched his spot-kick low into the bottom-left corner, beyond the despairing dive of Taylor Davis, to win it early in the second half.

It gives manager Darren Dickson a first win back in the Copsewood dugout, ahead of big away games against lower-half rivals Rocester and Heath Hayes on Saturday (3pm) and Tuesday (7.45pm) respectively.

GNP Sports, meanwhile, are winless in four games after their opening league win – a record they aim to change in Saturday’s visit to Stapenhill (3pm), ahead of a home clash with Chelmsley Town on Wednesday (7.45pm).

In Division Two, Redditch Borough were too strong for hosts Coventry Alvis in their 3-1 reverse at Green Lane last weekend.

James Mudie’s dipping volley provided an excellent opener for the visitors, putting them in good stead to double their lead through Dan McCarthy’s stabbed finish that hit the underside of the bar before going in.

With a 2-0 deficit to claw back, a penalty miss from Adam Bourn before the break failed to stoke the flames of salvation for Coventry.

And so their misery was compounded in the second half, when McCarthy struck his second to wrap things up for Redditch – in spite of Matthew Shephard’s late consolation.

Rivals Coventrians and Kenilworth Sporting are enjoying life in Division Three at the moment, with three wins from three ensuring they are both sitting pretty near the top of the tree.

A Jeremie Agholor hat-trick guided Coventrians to a thumping 4-1 comeback win over Welland at Bennetts Road on Saturday, with Nathan McGarrity adding the other against his former club from the bench.

Kenilworth were also winners by the same scoreline, ousting Leamington Hibernian courtesy of braces from Matthew Boyle and Jason Evans at Gypsy Lane.

A trip to leaders Enville Athletic poses the toughest challenge to Arron Cheshire’s Coventrians side yet on Saturday, while Sporting aim to keep the ball rolling away to mid-table FC Shush (both 3pm).

Warwick race into next round with Vase rout

Many plusses despite defeat – Holleran

Do3 warms up for winter training

Quartet back in race action for Spa