Update from Chairman on behalf of the Board of Directors, Jim Scott:

We have moved a step nearer the return of football with the announcement by the National League that Season 2020-2021 will be scheduled to commence on Saturday 3 October, 2020 with the final league fixture being played on Saturday 29 May 2021, subject to FA approval for the late season end and play-offs scheduled to take place in early June.

Brakes first fixture of the season on 3 October will be a Second Qualifying Round tie in the Emirates FA Cup. The FA will be announcing on Monday 3 August details of early round draws, for the FA Cup, FA Trophy, FA Vase and FA Youth Cup plus Round Dates and Prize Fund information. Step 2 clubs do not enter the FA Trophy competition until the Third Qualifying Round stage.

We will face significant challenges in preparing to return to football and will shortly be receiving protocols from the National League containing guidance for Clubs under the following headings:

• Stage 3 Return to Competition, No Spectators

All of the above will be based on the government’s Coronavirus (COVID-19) guidance on the phased return of sport and recreation.

We are advised that in terms of crowd numbers under Stage 5, it is likely that ground capacities will be significantly reduced from normal levels. The “socially distanced” capacity for each stadium will vary according to the design, layout and configuration of each ground, and will need to be assessed by each Club in compliance with government guidance and in conjunction with their local authority.

In view of the above information, the clubs provisionally scheduled pre-season friendly versus Racing Club Warwick has been cancelled and will hopefully be re-scheduled in the lead up to the new season.

Manager Paul Holleran will devise a new schedule for training and pre-season friendlies and we will advise you of those games in due course, although sadly, under present guidelines spectators will not be able to attend.

The Board of Directors have a scheduled Board Meeting for Monday 3 August where we will discuss the implications of guidance received and also make decisions relating to Season Tickets for the campaign ahead.

A planning application has been submitted with regard to the requirement for the additional seated stand we are required to install and we are delighted to announce that the ‘Boost Your Club’ initiative has reached a total of £18,500 towards our stated target of £30,000. A fantastic effort and every contribution, however small, are greatly appreciated. We were asked if we would consider extending the deadline to enable those wanting to make an end of month contribution, to which we have readily agreed to do so until 7 August.

Volunteers have been turning up every Saturday throughout the summer and we would be delighted to see any of you on a Saturday between 9am- 12noon. Your help is most welcome.

All National League clubs will be attending a Zoom Conference call with the National League Board representative on Tuesday 11 August and hopefully we will have further information to impart to you all post that meeting. In the meantime, keep safe and we look forward to seeing you all in October, if not before.

Chairman on behalf of the Board of Directors 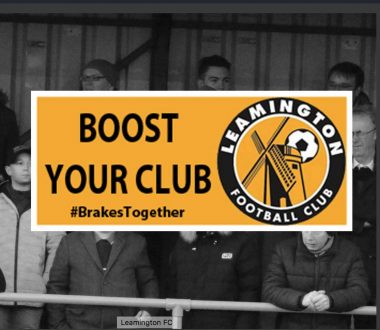 Boost Your Club – Leamington FC has launched the ‘Boost Your Club’ scheme to enable fans to help raise funds in these challenging times to:

1) Support next season’s playing budget and;

2) Help meet the costs of installing a new stand and 250 seats that are required to meet ground grading regulations that have to be implemented by 31 March 2021.