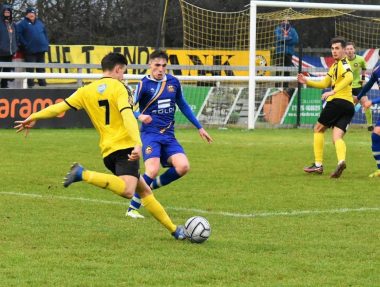 A SHARE of the points with National League North leaders Gloucester City gave Leamington a strong start to the New Year – ahead of Saturday’s trip to Spennymoor Town.

Leaving the Brakes ninth in the table, Paul Holleran’s side remain in a promising position just outside of the play-off places by two points – a picture that will become clearer after four further league fixtures this month.

With just one change to the side that held Hereford to a goalless draw on December 28, Joe Clarke took his place back in the starting line-up as the hosts sought to enact revenge for their 1-0 defeat in the recent reverse fixture on Boxing Day.

After a lengthy stoppage to play minutes into the game – a result of a coming together between Jack Edwards and City ‘keeper Rhys Lovett – Leamington registered the first attempt on target when Taylor Allen blasted Danny Waldron’s centre goalwards, substitute shot-stopper Niall Maher tipping away for a corner.

Sam Osborne gave yet another glimpse of his attacking prowess when flashing a drive just wide of the far post after drifting inside from the wing, Joe Clarke coming closer still with a 25-yard blast against the crossbar moments later.

But while the hosts enjoyed the better quality chances, it was the visiting Tigers who claimed the breakthrough goal – Campbell darting onto a headed flick on before unleashing a first-time stab goalwards which went underneath the body of Jake Weaver.

While Gloucester had the crucial lead at the break, a yellow card for captain and former Brakes man Liam Daly before the half was out would eventually prove crucial in the final outcome of the encounter. 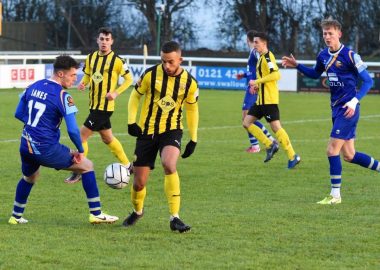 It was Osborne who was again the hosts’ livewire, firing another shot that came tantalisingly close to drifting inside the post, before Gloucester found themselves down to ten men after a Daly handball resulted in the 33-year-old’s dismissal.

Although the free-kick that followed came to nothing after an English header failed to hit the target, the substitute quickly made amends with the next chance that came his way.

Meeting Osborne’s cross after the playmaker worked his way down the right flank, the defender finished clinically at the near post to deservedly draw the sides level.

Allen was next to test the Gloucester rearguard with a snap-shot that was excellently blocked inside the penalty area, before Simeon Maye’s deflected effort narrowly evaded the visitors’ goal.

For all of Leamington’s attacking endeavour to take the game to the Tigers and hunt for three points, further opportunities for Allen, Osborne and Waldron failed to hit the net – though Holleran will undoubtedly be pleased by the dominant showing his side put on against the league high-fliers.

The Brakes’ upcoming opponents Spennymoor are currently on a three-match unbeaten run in the league going into Saturday’s meeting at Brewery Field – with the Moors set to take on Hereford in the lead-up to that encounter on Tuesday night.