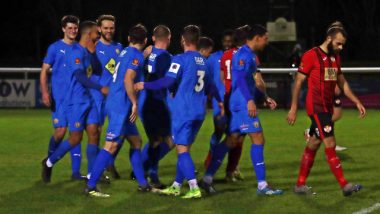 18 days will have passed since Leamington’s last outing against Kettering Town – who the Brakes are seen celebrating against here – and their next fixture versus Hereford. Picture: Sally Ellis.

CHAIRMAN Jim Scott says that Leamington were left with no choice but to opt for a suspension of the National League North season – in a bid to preserve the long-term future of the club.

The Brakes will be out of action until February 6 at the earliest, in the wake of a National League meeting which revealed that government funding to help National League North and South clubs complete the 2020/21 season was to be distributed in the form of loans – as opposed to the grants which had initially been agreed.

With Step Six sides rightly concerned about the lack of financial security associated with completing a campaign without appropriate aid, the decision was taken to bring the curtain down momentarily for two weeks – ruling out Leamington’s fixtures against Southport, AFC Telford United and Darlington for the foreseeable future.

Voicing concerns not too dissimilar to those heard in other boardrooms around the country, Scott believes that the immediate decision had to be taken to prevent further damage being done.

“I don’t fear for our future at the moment, but things are getting difficult,” said the Brakes chairman.

“As the months and the season goes by, it will become more and more difficult. Our priority as a club is to make sure that we’re around for many years to come and continue delivering a lot of the community benefits that we do – we’re not going to endanger the club for three or four extra months of football.

“Without the fans and the matchday revenues, things become near impossible for us.

“If they’d said to all of us clubs that the funding would be in the form of loans, most of would have said no to that.

“We wouldn’t want to put ourselves under that kind of financial pressure, we’d have opted out back in October if we knew this was going to be the scenario.”

With the question now being posed over how the Step Six season will conclude – if at all – there is genuine indecision at play, unless a sustainable flow of income should arrive.

“Part of me says yes [to the season being abandoned] – because that appears the sensible idea,” Scott continued.

“But the other side of it is that there are quite a few clubs that have already invested a lot of money this season, which will have gone down the drain – they did it on the premise that there would be funding in place – so you feel for those sides.

“But you can’t have everyone going to the wall, the long-term future is always the thing that everyone must look at.”

As it stands, Leamington will continue their FA Trophy campaign away to Hereford on February 6, with a league game at Kettering Town following three days later should National League North continue.