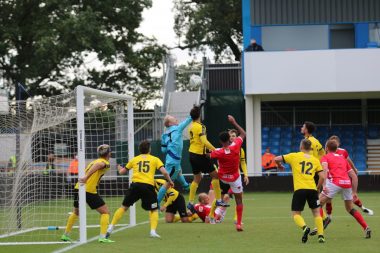 DANNY Waldron’s early opener was not enough to secure victory for Leamington after Solihull Moors came from behind in Saturday’s 3-1 defeat.

Paul Holleran’s side took a third minute lead at the SportNation.bet Stadium, but eventually succumbed after an Adam Rooney double and a Joe Sbarra strike turned the tide for the National League hosts.

In doing so, Moors won by the same scoreline as two weeks previously, as the Brakes signed off their pre-season programme with a defeat.

It seemed proceedings could have gone down a different route after Waldron’s early strike though, after the Leamington front man found his way behind the Moors’ defence before rolling the ball underneath Ryan Boot. 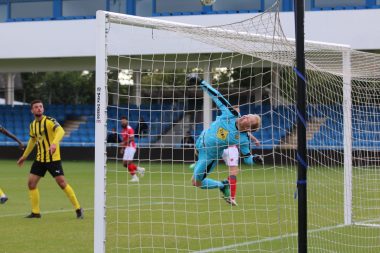 Jake Weaver pulls off a stunning save. Picture by Richard King.

It could have been two for the visitors when Jack Edwards flashed a vicious effort towards goal moments later, although the Solihull custodian was equal to the effort.

Boot’s save was crucial, as it allowed Rooney to level things up on 13 minutes with a well-placed header into the far corner from Jordan Cranston’s inch-perfect delivery.

A penalty shout for a foul on Kyle Morrison was waved away much to Leamington’s dismay after the defender went down after a cross was delivered into Solihull’s penalty area, a decision that spurred the Brakes on to try and regain the advantage.

New signing Sam Osborne was almost the man to do that, flashing a low drive inches past the post, before Moors delivered a hammer blow five minutes before the break. 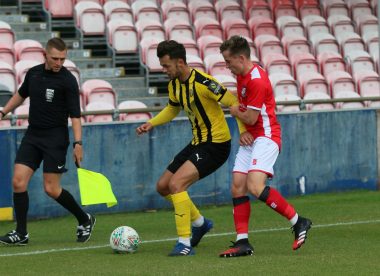 Stephen Gleeson was the man to set up the chance, shifting the ball onto the head of Rooney, who’s header was tipped away by Jake Weaver but only into the path of Sbarra to direct into an empty net.

A penalty call for a trip on Rooney was then waved away as the break beckoned, with Moors denied the two-goal cushion they desired.

Waldron almost started the second half as he did in the first, blasting goalwards from 25 yards out to test the concentration levels of Boot.

Weaver’s goal was threatened once again down the other end when Kyle Storer’s free-kick glanced just past the post, while Rooney’s turn and strike was well held by Leamington’s custodian.

And just after the hour-mark, Moors had the crucial insurance goal.

Rooney was alive to receive the ball from Sbarra after Joe Martin was dispossessed, before slotting home past the outstretched arm of Weaver. 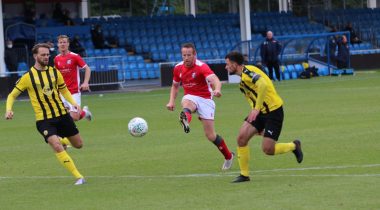 Alex Gudger almost added a fourth late on, but was denied by an excellent tip over the bar by the Brakes’ shot-stopper.

Leamington now turn attentions to a return to competitive action for the first time in almost seven months on Saturday, when hosting Southern League Premier Central side Banbury United in the second qualifying round of the FA Cup (3pm).