SOLIHULL Moors saw off Leamington despite much resistance in a 3-1 defeat at the Phillips 66 Community Stadium on Saturday. 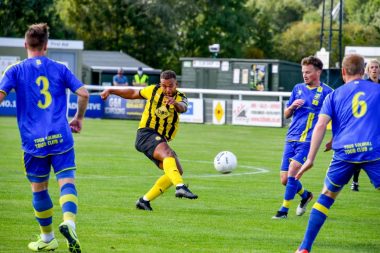 Goals from Jamey Osborne, Joe Sbarra and Jake Beesley sent the National League side on their way to a first victory of pre-season, with the Brakes’ Kaiman Anderson goal to halve the deficit at 2-1 ruling as a mere consolation at the final whistle.

Considering their opponents had held Championship side Coventry City to a 2-2 stalemate days previously, Paul Holleran’s men were not to be intimidated and forced the first opening of the afternoon, namely Dan Waldron’s effort from range that glided past Ryan Boot’s post.

But with just 12 minutes gone, the visitors assumed an early advantage with their first effort on goal.

It was a free-flowing move from Solihull, with former Burton midfielder Sbarra the man to lay the ball on a plate for Osborne to apply the finishing touch.

Chances only increased in number after the goal, with Cameron Coxe’s ball putting through Sbarra for a finish that was utlimately too weak to trouble Jake Weaver, while Simeon Maye could not have gone much closer to levelling for the hosts when rattling the crossbar with a header from Joe Parker’s inch-perfect corner. 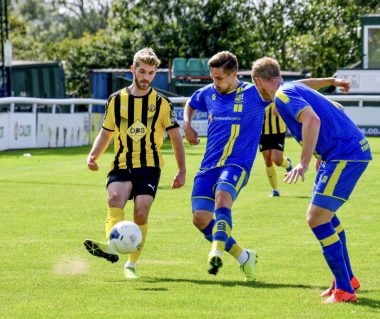 Stephen Gleeson then whipped a fierce effort goalwards that his ex-Birmingham City teammate Weaver did well to hold, while Junior English performed an excellent block to deny another former Blues player in Adam Rooney after giving away possession cheaply.

While the Brakes did find the net through Waldron, the goal was ruled out after the referee spotted a foul in the build-up.

It was a harsh reality made even more frustrating by a second Solihull goal before the break.

This time it was Sbarra to provide it, lobbing Leamington’s custodian with a fine finish after being picked out by Mitch Hancox.

Despite this hammer blow, Holleran’s men looked more positive after the interval and continued to push on looking for a response, their first chance to do so being through Connor Taylor’s attempt that did little to trouble Boot.

Cries for a penalty were later turned away by the referee after English was brought down inside Solihull’s penalty area, while Beesley narrowly diverted Ben Usher-Shipway’s cross wide in a game that refused to settle down.

Kieran Dunbar will feel aggrieved not to have added his name to the scoresheet, having done well to bring down a headed pass from Jack Edwards only to be denied by a sensational block as the ball travelled goalwards.

With three minutes remaining though, it was very much game on again.

Leamington’s goal came after a trialist regained possession to feed Kaiman Anderson, who weaved past a defender before rolling underneath the onrushing Niall Clayton into the net.

Hopes of a late comeback were immediately dashed however, when Beesley won and then converted a penalty seconds later after being brought down by Kyle Morrison.

The Brakes will do battle with the Moors again in their final pre-season friendly at the SportNation.bet Stadium on Saturday, September 26, before the competitive action gets underway in the FA Cup the following week.