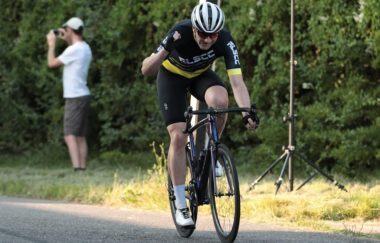 THERE WAS success for Royal Leamington Spa Cycling Club’s James Newnham at the Milton Keynes National Bowl, after racing to a rapid victory.

The fourth category race was contested across a short but fast circuit, and despite humid conditions, ended with the Leamington man at the front of the pack.

Having assumed his place in the leading group of riders at the beginning of the race, Newnham was patient in his approach to the outing and was duly rewarded come the end of the event.

Prioritising his energy reserves, the RLSCC rider emerged from deep during the final lap and advanced past a group of riders before mounting a successful attack on the leaders.

Discovering a pocket of space in which he could generate momentum, Newnham found himself as the race leader heading into the final ascent, and, having completed the hill climb, had enough distance between himself and his rivals to celebrate a race victory before crossing the line.