Old Leams' defence the key against Southam in derby battle

OLD Leamingtonians continued the fine start to the season with a 39-0 victory at neighbours Southam, scoring seven tries without reply.

Though the scoreline suggests a one-sided Midlands Three West (South) contest at Kineton Road, this was not the case as Southam competed well throughout but the difference was simply that the OLs defence was outstanding, and prevented any opportunity for the home side to put points on the board.

Meanwhile, the variety of the OLs attacking play created many scoring opportunities with the speedy OLs three-quarters scoring six of their seven tries to chalk up a fourth win four for the table-toppers.

The game started in ideal rugby conditions and from the kick-off OLs began running the ball whenever opportunities arose, putting Southam on the defensive.

After only six minutes full-back Callum Semple joined the line in a sweeping cross field move and broke through for try number one.

Another interchange of passes between backs and forwards ended with Ciaran O’Connor crossing for try number two on 21 minutes. The conversion by Henry Reynolds followed.

Southam came back into game well, but all efforts to get near to the OLs 22-metre area were met with solid defence and with half-time fast approaching OLs gained possession well into their own half and a sweeping three-quarters interchange of passes ended with left wing Adam Stannard outpacing the Southam defence to cross for try number three to leave the visitors 17-0 ahead. 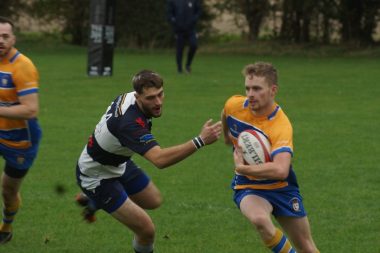 The second half was similar to the first with OLs continuing to play open rugby and the game plan was rewarded when winger Cameron Coutts touched down try number four to secure the bonus point.

The two packs were equal to each other but when Southam conceded a penalty that allowed OLs to kick deep into the home 22 metre area, a good line won ball led to the OLs driving forward freeing up back row Reece Jones to cross for try number five.

With OLs dominating the open play it wasn’t long before further tries were scored with Stannard adding his second try and when Simon Hemming received a reverse flip pass from stand-off David Canning that totally deceived the home defence, he crossed for try number seven. The conversion followed.

This was another display of team rugby with every player playing his part but yet again stand-off David Canning gets special mention for the way he dictated the game and brought his three-quarters into play to create the scoring opportunities.