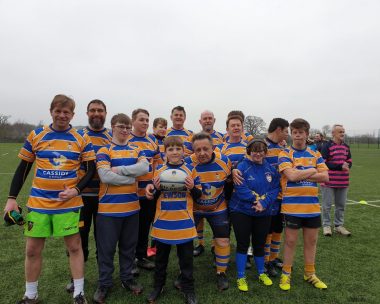 The group have ensured that the third national lockdown has been anything but quiet by setting themselves ambitious challenges.

The group, nicknamed the Hornets, have been forced to be inventive under the current circumstances and curated the idea of walking or running as many miles as possible as a collective – involving a fellow mixed ability team at Trinity Guild to up the competitive stakes.

In impressive fashion, Old Leams stormed to success in the head-to-head battle, surpassing the 1,000-mile mark in total to win the challenge.

It is just one example of how the club have been keeping active during the current downtime of competitive action, with members also participating in Mencap’s ‘Round the World’ challenge, which encourages the completion of physical activity to virtually travel across Europe.

While regular Zoom meetings have been the order of the day for the group to stay in touch throughout the past 12 months, a star name in Wasps and England fly-half Jacob Umaga delved into a recent call to pass on his words of advice in a question and answer session that would have no doubt helped inspire those in attendance.