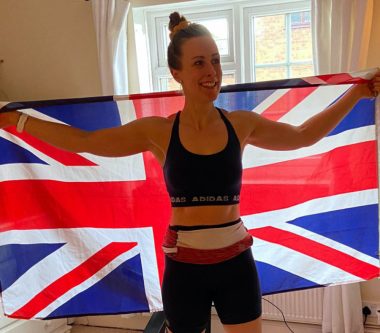 WARWICK Boat Club’s Olivia Joyce says the contrast in which she achieved the feat of a silver medal in this year’s World Indoor Rowing Championships was stark – in comparison to events in previous years.

Originally, the annual Championships were scheduled to be held at the Stade Pierre de Coubertin in Paris – the same venue for the 2020 edition – but instead became a virtual event held globally, taking into consideration the current circumstances of the coronavirus pandemic.

Competitors across the various age groups and distances logged their live results by connecting a laptop to their rowing machine – something which allowed events to be contested in real time across the world and provided the level of accuracy that gave organisers the ability to detect false starts, for example.

For Joyce, who went into the event as a gold British Rowing Indoor Championships medallist, the smallest of margins worked in her favour to earn her a place on the podium, claiming second place by just one tenth of a second – which she attributed to her strict training regime.

“The silver lining of the lockdown was that I was able to work from home, I trained between an hour and 90 minutes every day with one day off a week,” she said.

“The biggest part of my training was to lose weight to get into the lightweight category, otherwise I would have been competing against women up to 30kg heavier than me who would be about ten seconds faster.

It was only a matter of years ago that Joyce was a mere novice in the sport, beginning her venture into the world of rowing by signing up to a learn-to-row programme at Warwick Boat Club over the course of three years.

From there, the University of Warwick engineer found herself racing in the Women’s Henley Regatta, prior to her British Rowing Indoor Championships success.

And on the back of her latest piece of silverware, Joyce admits she is still coming to terms with her achievement and encourages more women to try taking up the sport themselves.

“The 500m is a short race so you have to train to go flat out from the start and settle into a really high rate,” she added.

“I practiced over 600m to 700m so I could treat it as a sprint. A fast start is vital so I practised the start for hours and hours.

“It was fantastic to get the silver because I achieved a massively improved time to get my personal best.

“I must admit I missed competing in Paris with all of the adrenaline, the cheering of colleagues and the podium presentation, instead I just got the medal in the post – after the race at home I just had a shower and walked the dog.

“Rowing is a great sport for women, as it’s a full body workout for women of all weights, heights and ages.”