A penalty from Rob Thompson-Brown backed up by Connor Gudger’s free kick and a late strike from Kurtis Revan ensured Paul Holleran’s win picked up their second league win on the spin in front of a crowd in excess of 1,500.

With only one league defeat to their name, Salford entered Saturday’s clash level on points with table topping Harrogate.

Having conceded just seven goals from the opening 12 games, the match was set to present Brakes with their toughest up-front assignment of the season so far.

Salford had early chances to take the lead through Josh Askew and a deflected strike after Joe Magunda lost his footing on the edge of the penalty area.

Mike Phenix proved a nuisance to Brakes’ backline and almost opened the scoring in comincal fashion when Junior English prevented the ball from entering the goal on three occasions before Breeden saved on the line.

But the forward made up for his early miss moments later when his penalty kick on 19 minutes beat Salford keeper Max Crocombe.

Brakes skipper Tony Breedan had to be on form as Ibou Touray’s strike forced the keeper into an unorthodox save.

Breedan was eventually beat on 29 minutes when Lois Maynard fired in a hopeful effort that was neatly deflected into the far corner by Phenix.

Connor Gudger restored Leamington’s lead moments before half time though with a free kick on the edge of the box. 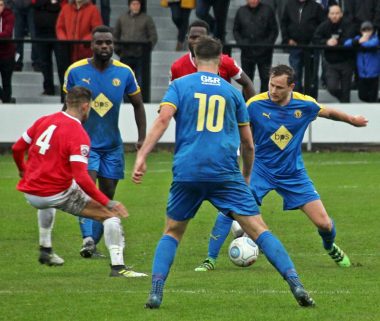 It took Salford 20 minutes to draw level again when Phenix headed home Anthony Dudley’s delivery to drag his side level once more.

Breedan did well to prevent Phenix from bagging a hat-trick after the striker pounced on a loose pass to strike goalbound, which Breeden saved at full stretch.

Brakes then went mightily close themselves when Kurtis Revan stabbed the ball into the path of fellow substitute Calum Gittings, who cut inside and crashed in a low drive that was deflected inches past the post.

But Brakes’ determination paid of five minutes from time when Salford failed to defend a corner, allowing Revan to bundle to ball home.

Dunbar was unlucky not to add a fourth from Brakes when Gittings broke from the midfield to rush into a two-on-one situation. But Crocombe pulled off a fine save.

“When we had to sit together and dig in we did that. And when we needed to be expansive and brave we were.

“I told the players if we sit in against Salford we will get beat. But we did try and play higher, press higher, and keep their better players away from our goal.

“To do that you’ve got to work extremely hard. The players were fantastic today.

“It was a great game. At 2-2, everyone expected Leamington to lose this game. We’ll leave it at that.”