FOOTBALL: BRAKES were left to rue missed opportunities as they slipped to defeat against Tamworth in their opening home fixture of the season on a miserable Tuesday evening.

It took the visitors just four minutes to score when a slice of good fortune saw Andy Burns’ shot strike Gudger in defence. The deflection then went in off the underside of the crossbar, leaving keeper Tony Breeden rooted to the goalline.

Andy Morrell’s side were well on top in the opening quarter of an hour and went close once more when Connor Taylor’s wayward effort was picked up by Burns who drove the ball dangerously across the goalmouth.

Fortunately for Leamington there was nobody in a red shirt to connect.

Junior English then had to clear Lambs’ skipper Luke Jones’ header away from the goal line.

The Brakes home debutant then hooked a powerful first time drive just over the bar as Jamie Hood headed down a corner kick.

English was rewarded minutes later though when a corner from Thompson-Brown saw the 31-year-old connect with his right foot to bring the game level. 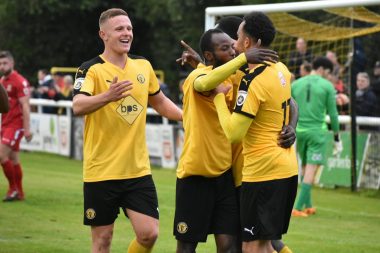 Brakes could’ve easily gone one up as efforts from Colby Bishop, Thompson-Brown and Obeng were all saved.

Taylor registered Tamworth’s first effort of the half, picking up a loose clearance to crash in a low drive that stung Breeden’s palms.

Brakes then countered as Obeng’s dart forward was halted by a challenge that saw the ball loop into the path of Bishop, whose shot was eventually blocked.

Obeng’s direct running continued to occupy the visitors defence, and he cut in from the right to lash in a shot that was parried by Rowley.

Further shots were traded, before Tamworth retook the lead less than 20 minutes from time through Aman Verma – whose low shot got past a desperate dive from Breeden.

Brakes appeared to be spent as an attacking force and failed to create any further opportunities as the visitors held on comfortably to record their first win of the season.

Leamington next play on Saturday afternoon when they host Southport at the Phillips 66 Community Stadium. Kick-off is at 3pm.