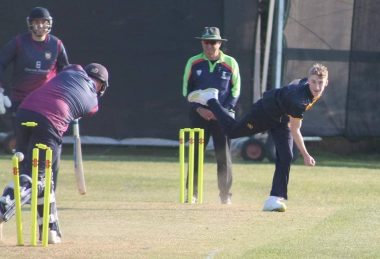 WHILE Kenilworth Wardens were eliminated at the first hurdle of the Graham Williamson Trophy on Sunday, a Tommy Rex-inspired victory at Bridgnorth ensured a strong start to Birmingham & District Premier Division Two.

The Wardens were unable to challenge Ombersley’s 257-9 total in their most recent outing in the Trophy, falling short by 86 runs and being skittled out in the 33rd over, but there was still plenty to be cheerful about given the impressive start made in the league.

An 82-run win last Saturday provided a statement of intent for the season ahead, with the all-round performance of Rex catching the eye of Kenilworth skipper Harry Johnson in particular.

“We know Tommy is a very accomplished player and coming to the wicket in a tricky situation with a lot of time left and quite a few wickets down he did a great job,” he said.

“He batted a lot of time before cashing in at the end of our innings to get us to a defendable total.

“Tommy had a breakthrough season with the ball last year and became very dependable, he bowls with great discipline and hits the seam regularly which makes him very dangerous with red and white ball.

“He came back very well in the middle of the Bridgnorth innings as a strike bowler and took some vital wickets.”

Batting first after hosts Bridgnorth won the toss, Kenilworth looked to be slipping to a below-par final score on the opening day, standing at 158-8 despite impressive early efforts from Henry Cullen (38) and Andrew Leering (38).

The introduction of the unbeaten Rex (30 n.o) changed all of that, helping prolong the visitors spell at the crease and ensuring the innings was seen out with Josh Baker (25 n.o) in tow, finishing on a 237-9 score.

Despite Bridgnorth’s strong start, the wickets eventually began to fall at regular intervals after the hosts passed the century mark, Rex (3-32) and Baker (3-30) once again coming good to guide the Wardens to a straightforward and deserved victory.

Kenilworth were unable to repeat those heroics a day later against Division One outfit Ombersley, ultimately suffering from an uninspiring start to the second innings.

The hosts showed their class when openers Jack Haynes (64) and skipper Liam Gwynne (63) laid on 106 before the fall of the first wicket, building on that confident showing to surpass 200 runs by the time Ombersley lost their third wicket.

Johnson’s best bowling efforts produced four wickets and just 30 runs conceded to keep the hosts’ scoring down, but Kenilworth’s lack of conviction early on at the crease proved their biggest downfall.

Five wickets were lost by the 19th over, as the Wardens appeared destined for an early finish at 90-5.

While credit can be given to the manner in which the visitors – led by the fearless Johnson (60) – were willing to make a fight of it later in the innings, the lack of firepower to complement Kenilworth’s skipper avoided more questions being asked of the opposition.

The Wardens host Himley at Glasshouse Park in the club’s second league outing of the season on Saturday.