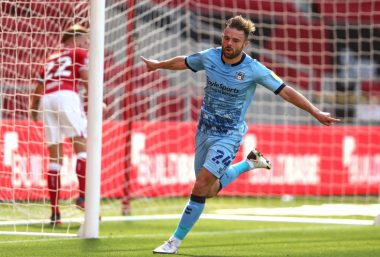 The Robins’ captain denied the Sky Blues a deserved point as the visitors returned to the Sky Bet Championship after an eight-year exile.

Callum O’Hare hit the post and Leo Ostigard was twice denied by Dan Bentley as the Robins rode their luck, but boss Dean Holden claimed victory in his first league game in permanent charge.

Holden was appointed as Lee Johnson’s replacement over the summer and he was handed the perfect start when Paterson struck just seconds after kick-off.

The hosts immediately went on the attack with Famara Diedhiou and, when Nahki Wells crossed, Paterson fired into the bottom corner from 12 yards.

It was a nightmare return to the Championship for last season’s League One champions, but they nearly levelled after 11 minutes. 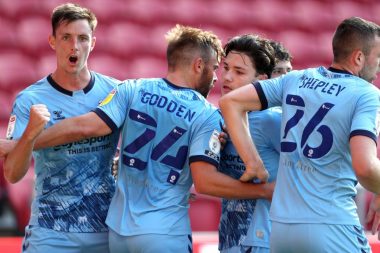 Godden’s header was well saved by Bentley and the onrushing O’Hare smashed the loose ball against the base of the post.

A minute later Marko Marosi saved Diedhiou’s header, but the early goal failed settle the hosts and Coventry recovered well, causing enough problems to suggest they can thrive back in the second tier.

The Sky Blues began to find pockets of space and it was no surprise when they levelled after 33 minutes, when O’Hare’s cutback was only half cleared and Godden rifled in.

The Robins looked rusty and Gustavo Hamer’s shot was deflected over as composed Coventry continued to press.

Mark Robins’ visitors oozed confidence as they looked to extend a 14-game unbeaten league run stretching back to December.

They made light of having played just one competitive game since March after League One was ended early by the coronavirus pandemic, and Godden was inches away from O’Hare’s cross eight minutes before half-time.

Bentley saved from Ostigard and the hosts squeaked into the break level, fortunate to have the time to reorganise.

They lacked bite, especially the eternally frustrating Diedhiou, and the striker underlined his deficiencies when he failed to seize on Wells’ cutback two minutes into the second half.

Coventry tried to regain control and Bentley bailed the hosts out after 53 minutes with a smart save to again deny Ostigard.

But the Robins slowly improved and the introductions of Chris Martin and Tyreeq Bakinson gave them added steel.

Martin went close to a debut goal when his header was spilled by Marosi and Bakinson drilled just over with 21 minutes left.

But the hosts grabbed their winner with eight minutes remaining when Kalas nodded in Paterson’s far-post corner before Andi Weimann hit the bar late on.