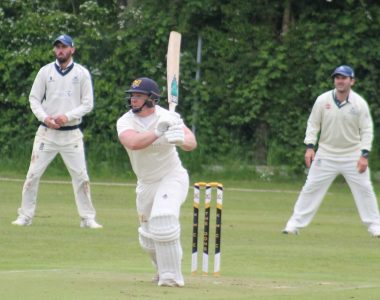 Trailing their rivals by 17 points following last weekend’s win – Kenilworth’s ninth this season – the second-placed Wardens were simply a class above the division’s basement side with both bat and ball in hand.

From Tommy Rex’s four-wicket salvo, to Nick Seager’s unbeaten 84 runs, the visitors looked assured from the start at Morda Road and gave Oswestry little chance of salvaging meaningful points from the encounter.

Fielding first after winning the toss, Kenilworth had to be patient to instigate the hosts’ batting collapse after Rex’s (4-27) early dismissal of skipper Warrick Fynn (4).

Ryan Lockley (26) was next to go after a partnership of 45 with opener Tommy Bromage (17), with Oswestry’s batting line-up clearly lacking in substance as the innings progressed.

With Rex forcing the issue by taking the final two wickets, Kenilworth dismissed the hosts for just 134 runs in the 38th over and initially began slowly when Keith Bell (0) was dismissed with the sixth ball bowled by Harry Darley (2-32).

But when Seager formed a partnership of 61 runs with Ali Zaryab (11), and then a match-winning combination of 76 with Harry Johnson (15, no), Kenilworth comfortably won the day.

Next, the Wardens host Wem, third, in Saturday’s crunch clash.

OVER IN Premier Divison One, an equally crushing win was recorded by Leamington in a 297-run rout of Shrewsbury, thanks to Harrison Smith (107, no) and Umar Siddique Khan (105) centuries.

The Arlington Avenue outfit punished the visitors’ decision to field first by firing a 389-4 score, with Oliver Currill (67) also securing a half-century and Chris Calcott (45) going close to replicating that feat for run-happy Spa.

And with the Shrews having their work cut out in issuing a reply that could come close to matching that of the hosts, Rob Foster’s (25) top score paled in comparison to Leamington’s batsmen.

Currill (4-31) turned on the style once more with impressive deliveries, while Matthew Davison (3-21) also racked up several dismissals to help see Shrewsbury off for 92 runs in the 23rd over.